You are here: Home / News / Publishers Sue the Internet Archive for Scanning Books 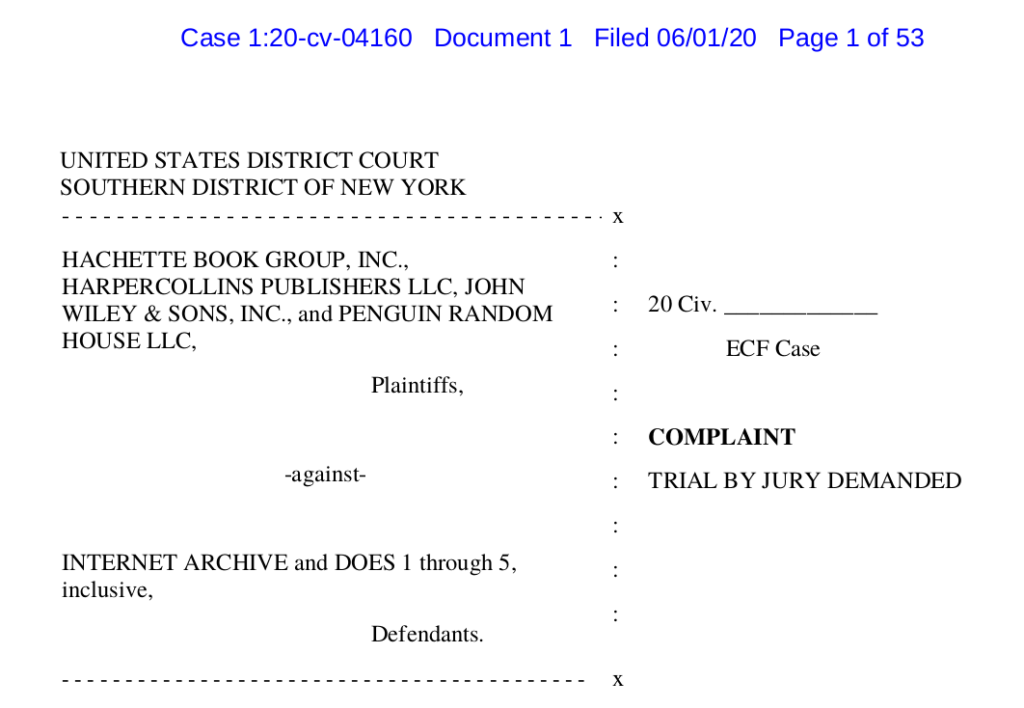 On June 1, four major US commercial publishers sued the Internet Archive for “willful mass infringement” of copyrights by scanning books and distributing copies on the OpenLibrary.org and Archive.org websites, without any permission from, or payment to, the publishers or authors of the works included in those books.

The complaint notes that these four publishers are all members of the Association of American Publishers (AAP). AAP was one of 40 signatories, including the NWU, of a joint Appeal from the Victims of Controlled Digital Lending issued in 2019. Two of the four publishers bringing the lawsuit are US subsidiaries of European parent companies (Hachette Livre, which is part of the Lagardère Publishing group, and Bertelsmann) that are affiliated with the Federation of European Publishers (FEP), which also co-signed the Appeal.

The court complaint, however, was brought only by the four named publishers, and not as a class action. At least as originally filed, neither AAP, FEP, nor any authors or organizations of authors are parties to the lawsuit. The NWU had no advance knowledge whatsoever regarding this lawsuit.

The complaint addresses the book-scanning projects the Internet Archive self-describes as Controlled Digital Lending and the National Emergency Library, but not some of the Internet Archive’s other activities such as “One Web Page for Every Page of Every Book“.

In the Appeal from the Victims of Controlled Digital Lending, authors (including the NWU and other writers, illustrators, photographers, and translators), publishers, literary agents, and reproduction rights organizations jointly denounced so-called “Controlled Digital Lending” (CDL) as “a flagrant violation of copyright and authors’ rights”. We called for “dialogue among writers, authors, publishers, and librarians on how to enable and create the digital libraries we all want, in ways that fully respect authors’ rights”.

The NWU continues to seek that dialogue, with the Internet Archive and with libraries, notwithstanding the new lawsuit filed by publishers.

Last Friday, May 29, 2020, the NWU facilitated the first-ever meeting between representatives of the Internet Archive, the lead authors of the Statement and White Paper supporting CDL, signatories of the Appeal from the Victims of CDL, and other organizations of authors’ who have criticized the Internet Archive’s book-scanning and online distribution of copies of scanned books.

During the meeting, we presented a mini “teach-in” on the ways that making unauthorized copies of both entire works and excerpts available without restrictions on the Web undermines the earnings of creators of in-print books, out-of-print books, short-form writing, photos, and illustrations. So far as we know, it was the first time the Internet Archive or its supporters had heard directly from any of the victims of their activities.

The Internet Archive would meet with us only on condition that the meeting be off the record. So we can’t say much about their response, other than that most of our specific questions remain unanswered.

Both sides expressed a desire for further discussion. We will continue to pursue talks with both the Internet Archive and libraries. We also continue to call for federal funding for digital content for distance learning, as a fair, legal way to create digital libraries and respond to the pandemic that the Internet Archive has used as its latest excuse for ripping off authors.