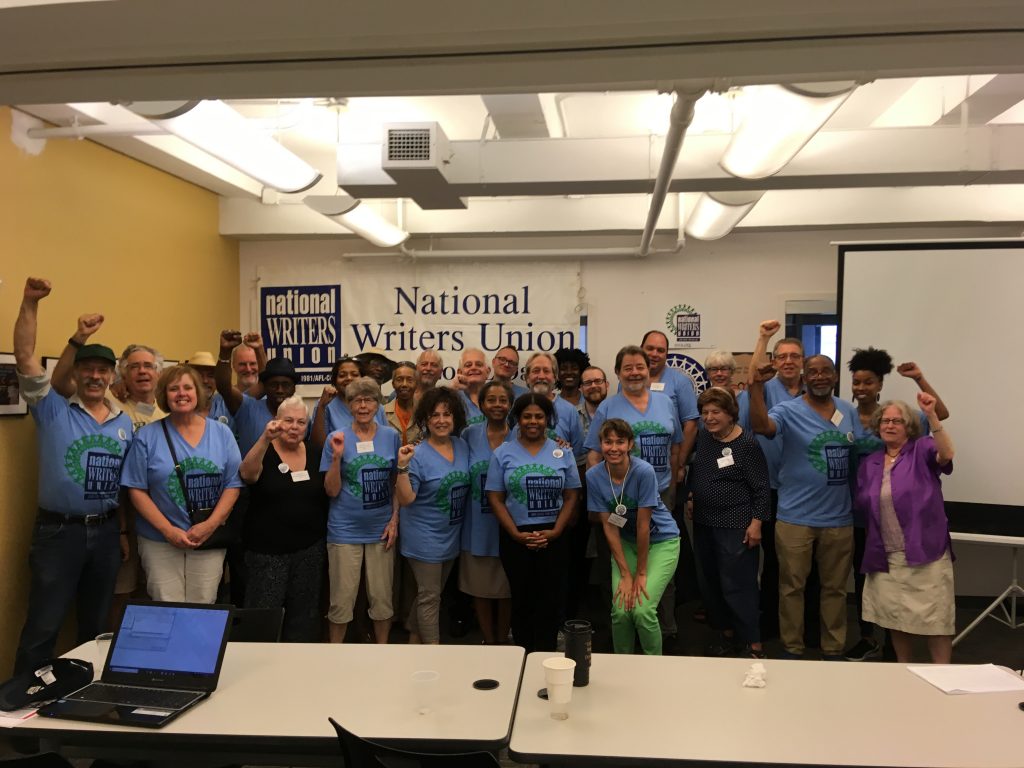 The 2018 Delegate Assembly, held in New York City, August 10-12, opened with a public event on Friday night highlighted by keynote speaker Julia Salazar.  She is running for NY State Senate against a long-time Democratic incumbent, and is part of the progressive movement that produced the Alexandria Ocasio-Cortez upset in the Bronx. Julia is a member of NWU and has previously worked on some UAW organizing campaigns and tenant rights issues. You can see the opening session here.

On Saturday morning we heard from NWU member Cedric O’Bannon via Skype. Cedric is a black freelancer who was stabbed by a fascist while covering a Klan rally in Sacramento, CA in 2016 and later arrested. He spoke about his struggle and the issues of racism and a free press, as we marked the first anniversary of the fascist torch-light rally in Charlottesville.

After passing a budget for 2018-2019, we heard from Lise Soskolne, the core organizer at Working Artists and the Greater Economy (WAGE), and Matt Taylor, an editor at Vice and a member of the WGAE’s organizing committee. We also passed a resolution in support of journalist Manuel Duran, who has been held in an ICE detention center since April. Meetings of the Book and Journalism Divisions and the Women’s Committee were all lively and well attended. Edward Hasbrouck (NoCal) and Susan Davis (NY) presented the Book Division report and Edward reported on International Advocacy Work.

On Sunday, we heard the Women’s Committee report, featuring NoCal Co-Chair September Williams and Chicago member Adrienne Gibbs (via Skype) and Women’s Committee Chair Brigid O’Farrell. And UAW Region 9A Director Beverly Brakeman introduced herself to the delegates, spoke about the current challenges facing the UAW and swore in our National Executive Committee.

All of the officer and committee reports and passed resolutions can be found on nwu.org under News. All in all, we are a stronger union now than we were before the Delegate Assembly.