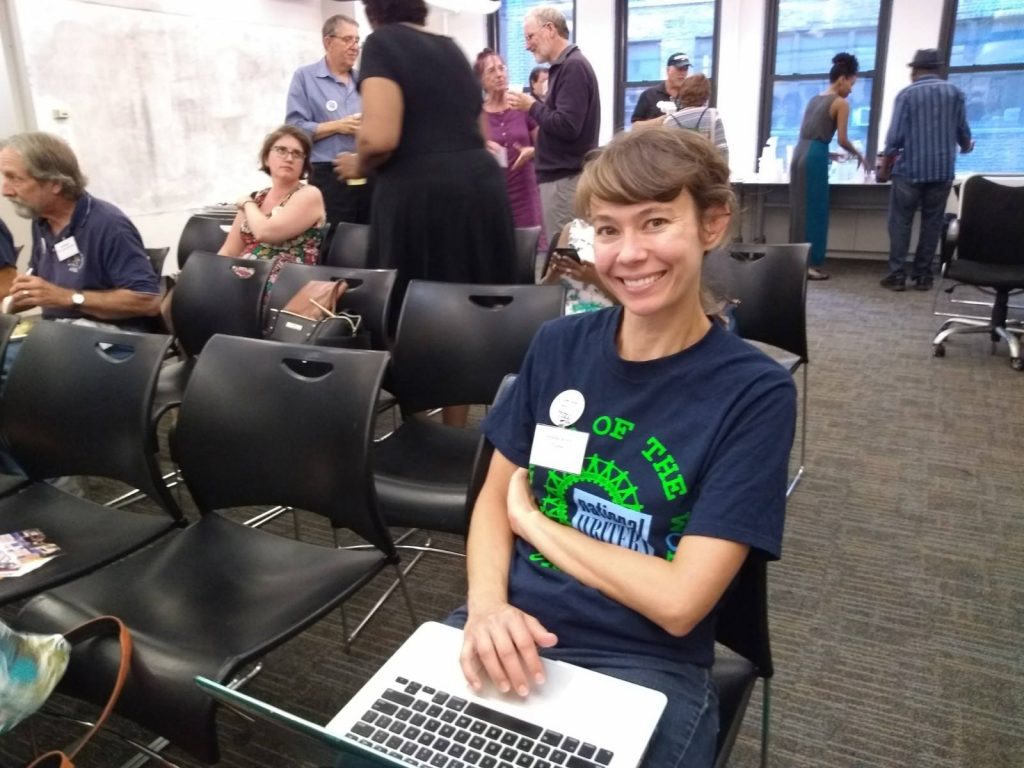 The International Federation of Journalists (IFJ) reports that at least 1 in every 2 journalists have suffered sexual harassment, psychological abuse, online trolling and other forms of human rights abuses. IFJ Gender Counsel director Mindy Ran writes that “we mourn the loss of six of our sisters in 2015, from France, the Philippines, Somalia, South Sudan and the United States.”  Journalists in the United States are under attack and the #Metoo movement has emerged as a powerful force.  The NWU and the UAW are beginning to take action.

At the 2015 Delegate Assembly we began to re-energize the NWU Women’s Committee. After the DA, I flew directly to the UAW Women’s Conference at Black Lake.  As one their guest speakers I was able to meet and renew connections with several colleagues in the Women’s Department and develop ideas on how to strengthen our ties to help the department, to showcase our work, and to get ideas about women’s committees.

Co-chair Aleah Barley and I planned to develop a survey for our own members to determine issues and needs for women. We started gathering surveys and reports and a partial resource list is attached. The work soon took a more international direction.

Asked to represent NWU on the IFJ Gender Council, I began participating in phone calls and reviewing materials. The IFJ Press Pass enabled me to attend the UN Commission on the Status of Women Meetings in New York in 2016 and 2017. The theme was the “World of Work.”  I established relationships with the International Trade Union Confederation (ITUC) delegates, the AFL-CIO International Department and Global Women’s Leadership Program, and participated on a panel (based on a global women workers book in which I have a chapter). Two NWU members were able to attend the Women’s Global Leadership Program, along the UAW Education and International Directors. This year new member Adrienne Gibbs represented NWU at the IFJ Gender Conference in Spain. We’ll hear her report.  See our NWU Newsletter reports for more information.  I’ve also written about the UN meetings for the History News Network.

We have now gotten support from Region 9A to attend the UAW Women’s Conference with over 300 women. I went in 2017 (see NWU Newsletter) and September Williams has just returned from the 2018 conference and we will hear her report. The women are very interested in NWU and some are potential members.  We worked on having an NWU Book Table where books could be reviewed and sold, including Tim Sheard and Hard Ball Press, and books were included in the Region 9A gift basket. We are hoping to develop a program to help working women tell their stories.  UAW has a new sexual harassment training program, Standing With Our Sisters, and Vice President Cindy Estrada issued a statement in March supporting the International IndustriALL “Not in my union, not in my workplace” campaign. The graduate students who now belong to other UAW locals are potential new members for NWU when they leave the universities and the harassment and international focus may be of particular interest.  We are connecting with two large locals at the University of California System to explore some joint projects.

I look forward to discussion at this Delegate Assembly on how we can expand the NWU Women’s Committee and increase our activities to engage current members and recruit new members. The Global Call to Action Resolution is a first step on which to build. I will continue to work on the international issues and am pleased to have Adrienne and September involved, but hope that others can step up and help develop and implement a plan to engage our membership more fully and recruit more women into the union.