You are here: Home / News / Trump’s Shock Troops Out of Portland! 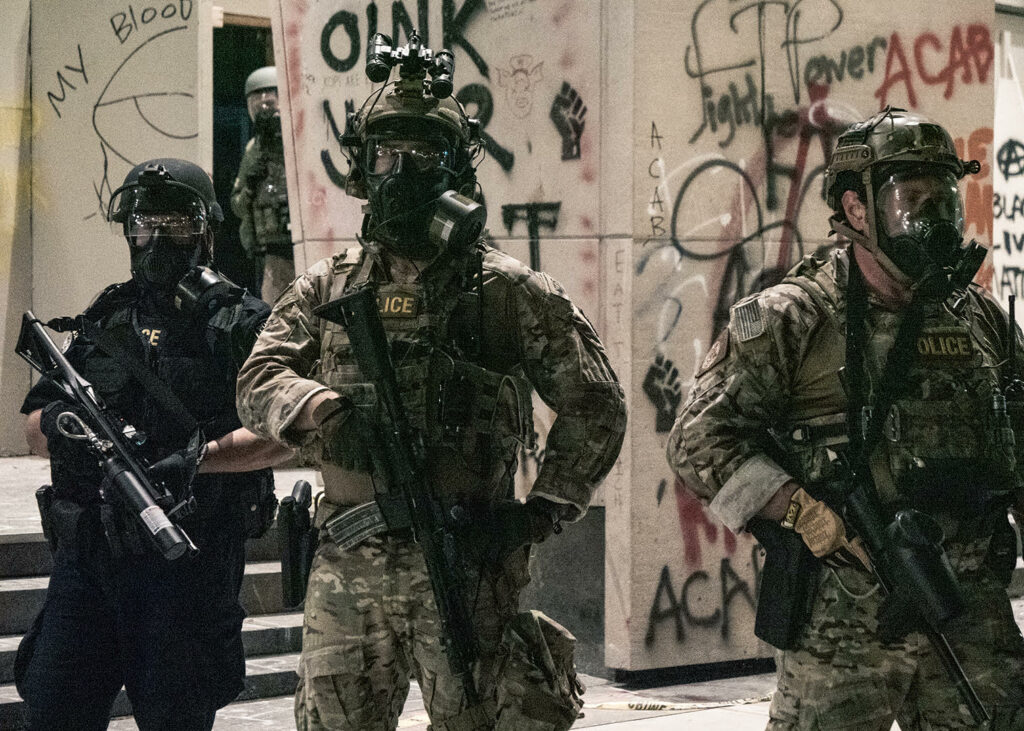 Triggered by the excessive use of force and killings of unarmed Black Americans by police, demonstrations have taken place in Portland for over 50 successive days, with demonstrators demanding the defunding and reimaging of policing.  Recently, the demands have grown to include the removal of federal militarized police sent to the city by President Trump over the objections of community members and local and state elected leaders.

Members of the media, many of whom are freelance journalists and photographers, have bravely covered the demonstrations as well as the police violence against the demonstrators, despite being subject to police intimidation, arrest and violence.

Although a recent court order now bans Portland police from dispersing, arresting, threatening to arrest, or using physical force against journalists or legal observers at the Portland protests, federal police have declared themselves free from that restriction.  They have attacked demonstrators, legal observers, and members of the media with tear gas, rubber bullets, and acoustic weapons.  They have also grabbed people off the street who they suspect of being protestors, using unmarked vehicles.

In response, the ACLU of Oregon has brought suit against the Department of Homeland Security and U.S. Marshals Service, the agencies which have deployed the federal police to Portland, Oregon.  In the words of the ACLU, the “lawsuit seeks to block federal law enforcement from dispersing, arresting, threatening to arrest, or using physical force against journalists or legal observers.”  As a staff attorney with the ACLU’s Speech, Privacy, and Technology Project explains, “This is not law and order. This is lawlessness.”

The National Writers Union is equally outraged.  As a union that defends the rights of media workers, we express our strong support for the critical work being done by those reporting on events in Portland and call for the immediate halt to police violence, including by federal police, against demonstrators, members of the media, and legal observers.