You are here: Home / News / The Nation and the National Writers Union Reach an Agreement 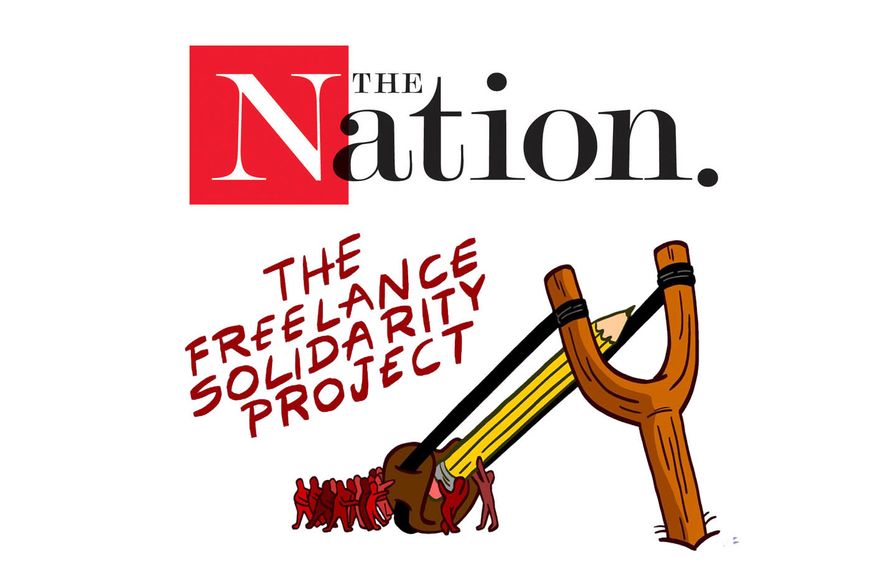 This article first appeared in The Nation (September 6, 2022)

The challenges freelance journalists face are no secret: payments delayed for months (sometimes failing to arrive at all), editors ghosting, while long and often uncompensated hours and isolation are all part of the job. Freelancers also pay for their own work expenses and health care (if they can afford it at all) and don’t get sick days, paid leave or vacation. Perhaps most significantly, the pay is generally so poor that it is close to impossible to make a living without additional income.

The only way to fix this dire state of affairs is to organize. The Freelance Solidarity Project—a division of the National Writers Union for freelance media workers—and The Nation are therefore proud to announce a new Unilateral Announcement that will set standards for freelancers at The Nation and, we hope, elevate conditions for contingent workers industry-wide.

The announcement outlines the rights of Nation freelancers, including timely payment, timely communication, partial payment for articles that are commissioned but not published, and access to the NWU’s grievance process. The document also outlines pay minimums: $.25 per word for web articles and $.40 per word for print, $20 per hour for fact-checking, $30 per hour for proofreading, $300 per illustration, and day rates of $500 for photographers and $330 for audio reporters. Freelancers can expect that The Nation will indemnify them in the case of legal action resulting from their reporting.

We see these rates and conditions as a floor from which we plan to keep climbing, a baseline from which to fight.

“The NWU traces our founding back to The Nation’s National Writers Congress in 1981. And over those 40-plus years we’ve had a relationship and a number of written agreements with The Nation, a publication that has always been important for labor and the left,” said Larry Goldbetter, president of the NWU. “This landmark agreement improves and strengthens the relationship between FSP and the NWU and The Nation, and it advances our campaign to improve standards for freelancers working in today’s media industry.”

Toni Morrison gave the keynote speech at that 1981 congress, which was sponsored by the Nation Institute.

“We may be dreamers or scholars, we may need tranquility or chaos—we may write for posterity or for the hour that is upon us. But we are all workers in the most blessed and mundane sense of that word. And as workers we need protection in the form of data: Who are we? And how many? What do we earn? What is earned off us? What are we entitled to?” she said.

From her speech—and that historic conference—the NWU was born.

The very term “Unilateral Announcement” reflects an unfortunate reality of US labor law: freelancers’ right to unionize and collectively bargain is not protected. Narrow interpretations of labor law mean that freelance organizing can be construed as a violation of antitrust law. This means we’ve had to get creative. The Unilateral Announcements that FSP has already developed with publications such as The Intercept, Jewish Currents, Defector, and Pipewrench aren’t only about the final product; they’re also a form of solidarity between the publications, staff, and freelancers.

The agreement with The Nation is the product of more than a year of work, beginning with FSP members making dozens of phone calls to Nation freelancers to better understand their working conditions. Some of these freelancers then formed an organizing committee, which had many meetings with D.D. Guttenplan, The Nation’s editor, and Rose D’Amora, managing editor, to collaborate on ways to improve and codify these conditions.

“This has been an education for all of us,” said Guttenplan. “I worked as a freelancer for most of the 25 years before I took over as editor here. So I approached this process sympathetically—but as someone also very mindful of the financial challenges facing all independent publications, I had a responsibility to our readers and donors as well. Some of the sessions were challenging—but in the end we arrived at an agreement I’m proud of.”

Journalism jobs have become increasingly out of reach for those without significant economic advantages: according to a recent Politico article, a master’s program at Columbia costs $121,290 to prepare students for jobs where they can expect to make between $36,000 and $58,000—and those are full-time jobs. A diverse, working-class-led media that understands the perils of corporate excess, climate change, fascism, mass incarceration, and war feels increasingly remote. This state of affairs is not a problem just for our sector of the economy but for the larger labor movement: the prevalence of such difficult working conditions in journalism makes it harder for all labor struggles to get the kind of fair coverage that helps drive recruitment and sustain campaigns.

These challenges are compounded by the crisis facing the media generally: Well over 2,000 local newspapers have folded since 2005, and the number of newsroom jobs has been slashed in half in just over a decade. Tech conglomerate capture of the advertising revenue that used to keep publications afloat means that once vibrant newsrooms have been hollowed out by hedge funds.

We must organize to demand better working conditions for freelancers—while also fighting for a world where vital, progressive news sources like The Nation can continue to flourish—and where freelancers can make a decent living working for them.

FSP is advancing campaigns on multiple fronts to help create this world. We recently won our fight to get the Freelance Isn’t Free Act passed in New York state to protect contingent media workers from wage theft—a fight we’re expanding across the country. We’re building a comprehensive database of industry rates to better equip freelancers with information, telling media companies how they can do better by freelancers, and standing in solidarity with staff unions to ensure freelancers aren’t used to break strikes or undercut pay. We’re also working with incarcerated journalists and hosting events with media workers around the world, including in Ukraine, Palestine, and Mexico.

Precarious work is encroaching on every industry and we stand in solidarity with all the workers finding creative ways to organize. Freelancers’ working conditions are tied to those of adjunct lecturers barely scraping by while teaching at institutions with multimillion-dollar endowments (about 70 percent of higher education faculty are now contingent). They’re tied to those of gig workers who sustain digital platforms like Uber, DoorDash, and Instacart—one in five of whom can’t afford enough to eat. They’re tied to the fact that private equity is hoovering up these industries, and that executive pay has skyrocketed, with CEOs making 351 times the average worker—a 1,322 percent increase since 1978.

Our destinies are entwined, not only because we’re up against similar forces. We need independent journalism led by workers with deep experience of the communities they’re covering to help us win these fights.

Or as Toni Morrison put it: “We don’t need any more writers as solitary heroes. We need a heroic writers’ movement—assertive, militant, pugnacious.”

Abigail Higgins Abigail Higgins is a freelance journalist in Washington, D.C., and on the organizing committee of the Freelance Solidarity Project at the National Writers Union.