You are here: Home / News / Tensions Mount at UN Commission on Status of Women 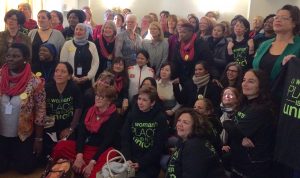 The tension was palpable at the annual meeting of the United Nations’ Commission on the Status of Women (CSW) March 13-24 in New York City, which the NWU’s Larry Goldbetter, Brigid O’Farrell, Rose Imperato and Amanda Robb attended.

Much of the unrest at CSW’s 61st session stemmed directly from concerns about an increasingly hostile environment within the US and around the world, especially as participants learned that President Trump’s travel ban against Iran, Libya, Somalia, Sudan, Syria, and Yemen had prevented several representatives from those countries from attending. Some questioned if future meetings should be moved outside of the US.

Still the full gathering was even larger than the Beijing Fourth World Conference on Women in 1995, bringing together delegates from the UN Member States and UN organizations, with representatives of 8,600 Non-Governmental Organizations (NGOs) and 150 trade unionists who met in a parallel forum to explore the theme: Women’s Economic Empowerment in the Changing World of Work.

At every turn, politics threatened to obscure the purpose of the event, as when progressive US NGO representatives reacted to the news that the two official US public delegates were from staunchly conservative organizations: Lisa Correnti, executive vice president at the Centre for Family & Human Rights (C-FAM), and Grace Melton, associate for social issues at the United Nations who’s with the Heritage Foundation. 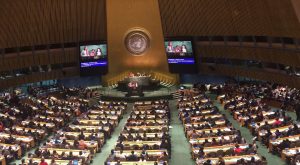 United Nation’s Commission on the Status of Women.

Both of those groups have a history of criticizing the United Nations, speaking out against progressive women’s agendas, and standing in opposition to the protection of human rights. C-Fam is even listed as a hate group by the Southern Poverty Law Center. In that vein, US State Department representatives refused to answer questions about how the delegation would negotiate for women’s reproductive health and LGBTQ rights.

In the second week, tensions for union delegates continued to rise when a number of UN Member States’ eliminated references to the International Labor Organization [ILO] from the draft Agreed Conclusions—the official document providing guidance to the UN on women’s issues for the coming year. During the lengthy drafting process, all references to the ILO and the critical conventions and recommendations setting labor standards around the world were taken out. It appears Russia was mainly behind this.

Global Unions issued an open letter to UN member States calling for reinstatement of the ILO, especially the Declaration on Fundamental Principles and Rights at Work. The letter referred to the position of opposing member states as, “incomprehensible, unmeritorious, and disingenuous.” An active campaign, including NWU’s outreach to the US delegation, resulted in the successful inclusion of the ILO language in the final document.

We also sought to ensure that trade unions; collective bargaining; decent work; equal pay for work of equal value; underpaid and unpaid-care work; and work for migrants, indigenous women and girls, were included in the final document.

One key union priority was including language against violence and harassment that women and men face in the work world, which is a top priority for the IFJ and will be part of a future campaign.