You are here: Home / News / “Standing By for Trump” 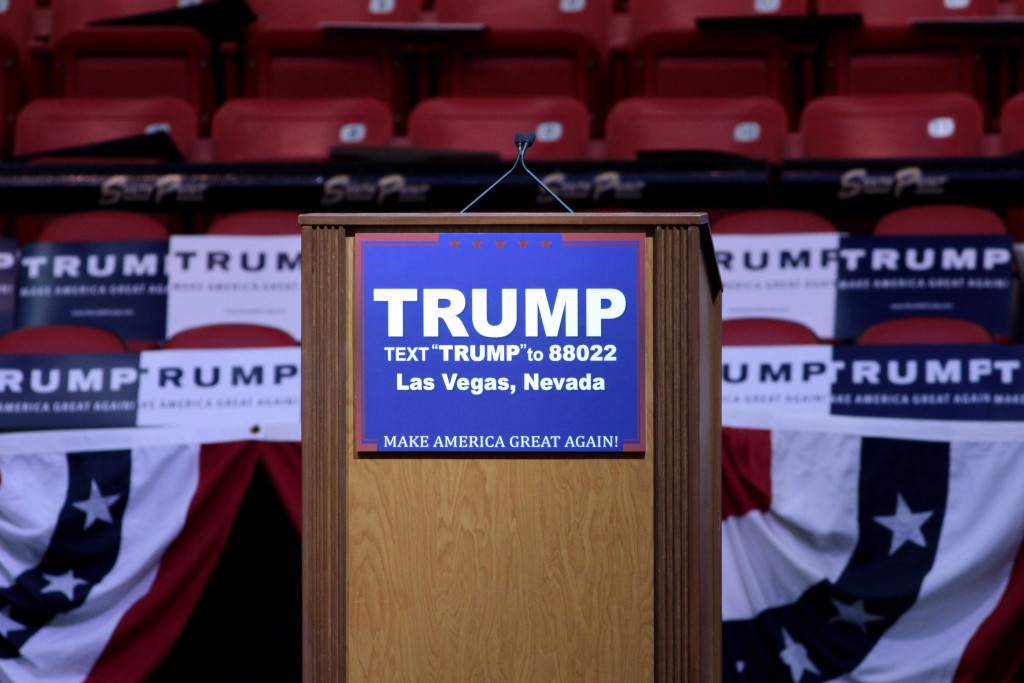 After the March 15 primaries, the three major cable news stations, Fox, CNN and MSNBC, covered every candidate’s closing remarks except Bernie Sanders. Instead, they spent about 30 minutes babbling about the night’s results while showing an empty stage and a screen banner that read, “Standing By For Trump.”

By now, everybody knows that Donald Trump has threatened Muslims and immigrants, openly called for the commission of war crimes, and offered to pay the legal fees of angry white guys who attack protesters at his rallies. It’s no surprise that he has the support of the KKK.

But Trump the Showman has had a lot of help becoming Trump the Contender. No one has helped more than the mainstream corporate media. In the first half of the primary season, Trump has spent about $10 million in TV and media ads, and there’s plenty more where that came from. Gushing at the prospect of more Trump ad revenue, CBS CEO Les Moonves told investors at the Morgan Stanley Technology, Media and Telecom Conference, “It may not be good for America, but its damn good for CBS!”

Even more to the point, corporate media has provided almost $2 BILLION in free publicity, what they call “earned time” as opposed to paid time, with non-stop Trump coverage and interviews. The NY Times (3/16) reported that Trump has received $1.8 billion in free “earned” time, while his nearest rival, Hillary Clinton has received less than half, at $745 million. All the other candidates are far behind.

In their chase for advertising dollars and cheap ratings, the corporate media should be listed as a major contributor to the Trump campaign. Liberal cable news station MSNBC is one of the main providers of free “earned” Trump coverage. It should be pointed out that MSNBC is a non-union shop, where more than two years ago the writers voted overwhelmingly to join the Writers Guild of America East.  MSNBC has had this election tied up in court ever since.

While there’s no room for a union, there’s always room for the Donald. MSNBC hosted a one-hour Town Hall for Trump prior to the Super Tuesday primaries. Isaac Chotiner, writing in Slate said that “the softball questions [were] enough to make you feel like you were watching a rigged entertainment program.”

On the other end of the spectrum, The Washington Post is now (incredibly) investigating itself for running 16 negative stories on Sanders in 16 hours—between March 6 and 7—a period that included the Democrat’s debate in Flint and the next morning’s coverage. And Rolling Stone’s Matt Taibbi showed how the NY Times edited an article after it was published online, changing headlines and content to “sandbag” Sanders.

I never thought I would live to see a black President of the US. I thought the racists would turn out in such overwhelming numbers that it would be impossible. Now, after 8 years of Obama-bashing, questioning where he was born, whether or not he is Muslim, and 37 attempts to repeal the Affordable Care Act, the storm I expected in 2008 may be on its way in the form of Hurricane Trump.

I urge all of our members, and NWU as a union, to stand with another developing mass movement, one that is made up of Black Lives Matter, immigrant rights groups, feminists, union members, LGBTQ activists and other progressives. Two days after a black protester was attacked, thousands turned up to force the cancellation of Trump’s next scheduled event at the University of Illinois Chicago (UIC) Pavilion. In full disclosure, I know some of those protesters and so do you. Some were even members of the NWU.