You are here: Home / News / So Cal Chapter Discuss Issues and Activism 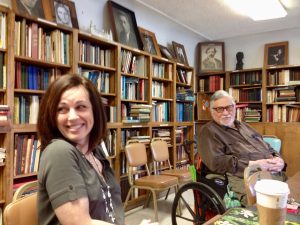 “Light a candle,” one person said. “Load a shotgun,” another said as we brainstormed ways to address America’s current political situation at the February 19 meeting of NWU’s So Cal Chapter, which seven of us attended, including new member, Mo El Gafi Mohamed.

The free floating discussion touched on a number of topics, including the 75th anniversary of the Japanese internment, and how actor George Takei’s family had spent time at California’s Manzanar camp.

“We need to grab on to these stories and experiences and stand in the light of our truth,” said Elle Febbo, So Cal chapter chair.

Member Eric Gordon connected the poor treatment of Americans of Japanese ancestry during WWII to the discrimination against Muslims with Trumps’ proposed travel ban. He also noted the tendency of the President to do things that cause distraction while he attempts to change laws and policies, “proceeding as if he has a mandate.”

We talked about labor working with a broader coalition to resist moves by the Trump administration that hurt citizens, while stepping up support for things that are part of the solution, including Measure H, which was a proposal to raise California sales tax slightly to better tackle homelessness. The measure passed in early March elections. 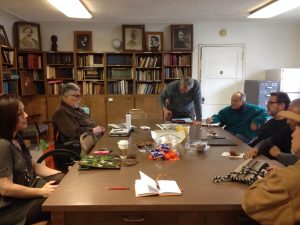 A lifelong union guy and former Cal State L.A. professor, he noted that unions in the state had faced particularly aggressive union busting over the last five years, which he wrote about recently in a chapter of a book on California labor put out by the UCLA Labor Center.

“I was looking for something that peaked my interest, and the whole issue of destroying unions has gone national,” Trujillo observed.

Though he said he’s “had a writing block since Trump was elected,” he’s continuing work on a political podcast for which he was writing a half-hour script and doing the narration, while Ismael “Smiley” Parra is composing the music for it.

One of the questions that came up during the meeting is what to say to young people about professional unions, who may be intimidated by them. 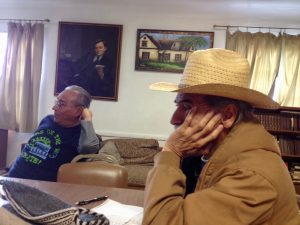 “Young people want to come to meetings, and the more labor unions are seen out in the community and connect, the more it helps them understand us,” said Parra.

He went on: “We need to hear and meet progressive candidates who are running for office, not necessarily endorse them, but have them show up at a house where you can meet them (and get to know them), which is different from a stump speech,” he added.

Trujillo and Parra plan to use the podcast to tackle the issues of the day and “to write for youth, to take message and share it, plant an NWU seed.”

The younger generation needs to learn to raise its voice and to march, when we can no longer, Febbo added.

Other ways to get youth involved is through voter registration, encouraging them to vote, and hosting an NWU essay contest with prizes. The theme would be: Who in your family benefitted from being in a union?

“Young people need a voice and a pl 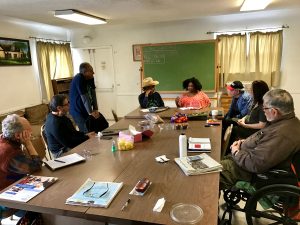 ace to express themselves. A lot are sons and daughters of laborers with amazing stories to tell,” said Parra.

He suggested regular meetings of once or twice a month, and getting word of the union out to people of all ages more as you run into writers or attend local events, such as the Pan African Film Festival, “where you’re among storytellers and can pass out brochures.”

Febbo talked about hosting a meeting on a Amtrak train, and conducting a meeting en route from L.A. to San Diego—near the Mexico border—to discuss on immigration and deportation, “We could ride down together,” she said.