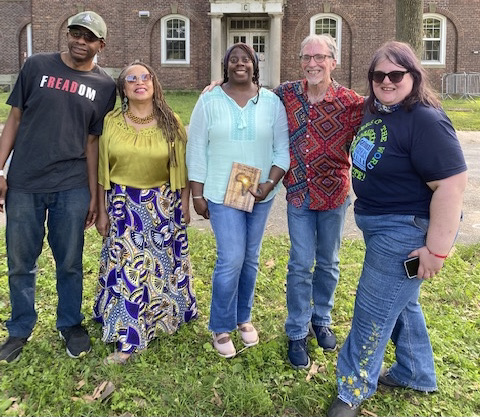 “The NWU was at the first NYCPF [a decade ago] to support the brave vision of poets taking over an island, and again this year they thankfully have!” said Alexandria Faiz, who is an NWU organizer.

Covid Rebels 21 is a subset of the NWU Open Mic Readers that Tim Sheard gathered on Zoom to counter pandemic isolation when the Coronavirus lockdown began in Spring 2020.

After Lora Rene Tucker had to step aside to deal with labor issues, Faiz took over moderating duties, maintaining the form and spirit of what Tucker began with the union’s traditional in-person forums at Manhattan’s Muhlenberg Library.

Fifteen avid memoirists, essayists and poets have kept a standing date each week, sharing praise and supportive critiques, helping one another enhance their craft and strengthened their bond as friends.

“It was exhilarating and freeing for me to participate for the first time in the Festival and to be on stage with such gifted authors from NWU’s New York Chapter,” Andrews said.

“I thought about how much we do with our hands, the struggles Black people have endured and how we’re still fighting,” Pierre said. “Covid put many down, but the hands of healers have helped us survive,” she added.

“McQuillan’s poem, “The Stranger in the Storm is My Brother,” based on a real-life encounter, challenged listeners to act with compassion amid our continuing Covid crisis.

Felix Leo Campos, executive producer of LeoPRO Productions and an NWU Ally, filmed all four readings and interviewed each participant about the personal themes in each poem, along with why they joined the NWU and the benefits they feel they get from membership.