You are here: Home / News / NWU Testimony at the NY Senate Committee Hearing on the Dependent Worker Act 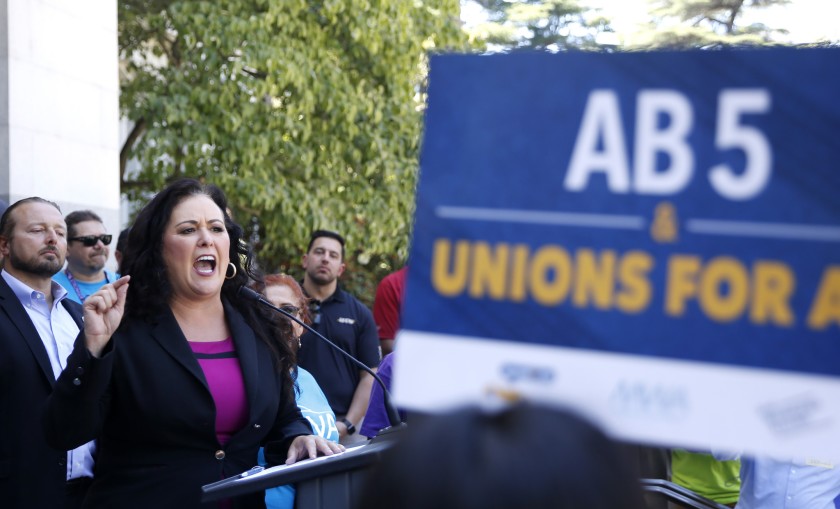 Assemblywoman Lorena Gonzalez (D-San Diego) speaks at a rally after her measure to limit when companies can label workers as independent contractors was approved by a Senate committee July 10.(Rich Pedroncelli / Associated Press)

Thank you to Senator Savino and the Standing Committee on Internet and Technology for inviting me to testify today. My name is Larry Goldbetter and I am the President of the National Writers Union/Local 1981 of the United Auto Workers Union (UAW). We are a nation-wide amalgamated local of freelance writers, representing writers in all genres, media and formats. This includes the full range of writers, from journalists and book authors to business and tech writers, travel writers, bloggers, work-for-hire writers and others. We promote and protect the rights, interests, and economic advancement of our members; we organize writers to improve their working conditions through collective action; and we provide professional services to members.

We are also no strangers to the issue of misclassification. When I first assumed this office, my second day on the job we held a meeting of 35 freelancers (out of 65) who had been misclassified by an outsource publisher for a major textbook publisher. The freelancers were writers, editors, translators and graphic artists working on a bi-lingual textbook. They worked for Inkwell Publishing on specific shifts with supervisors, on company laptops in the company offices. What Inkwell was calling their “invoices” were in reality, their time-cards. After completion of the project, Inkwell closed their doors owing these workers more than $350,000 With the support of the UAW Legal Dept. and the NYS Dept. of Labor we won a judgment in federal court for the full amount.

Since that time, misclassification has become the new norm. The current surge in organizing among misclassified workers in the taxi and tech industry, at Uber and Lyft, among domestic workers and nail salon workers, and many more, is providing a much-needed reboot to the labor movement. With our current campaign among digital media freelancers, we are proud to be a part of it.

Perhaps one of the biggest battles against misclassification is being waged right now by 49,000 of our sisters and brothers against General Motors. Now in its fifth week, the main demand of the strikers is ending the multi-tiered wage system and the use of Temporary Part Time workers (TPTs), who do the same jobs as permanent workers for a fraction of the pay, few benefits and are easier to get rid of. As one GM worker put it, “It ain’t fair. It ain’t right. If you’re going to pay people to do a job, pay them all the same.”

So, to be clear, NWU, a union of freelance creative professionals, stands squarely against the growing use of misclassification of workers. We were active in the discussions around AB5 in CA and truly believe we can improve on that here in NYS.

At the same time that we oppose misclassification, we are also very concerned about protecting the rights and livelihoods of the creative professionals we represent and work with in many fields, more specifically writers, editors, photographers, photojournalists and graphic artists who choose to be independent freelance creators and don’t have that choice made for them by publishers looking to cut costs. There are many reasons that creative professionals might choose freelancing over a staff position, including flexibility, greater income, working for oneself, certain tax advantages and more.

While the CA law was being drafted, we helped lead a coalition of 20 creative professional groups along with the American Society of Journalists and Authors (ASJA), Society of American Travel Writers (SATW), and the National Press Photographers Association (NPPA). This coalition included the Authors Guild, NABJ, the Freelancers Union and member organizations of the Authors Coalition of America. We were looking then, and we are looking now for an exemption from the ABC Test for creative professionals who produce work that is copyright protected.  In fact, we believe that under both existing wage orders and the business to business exemption of the CA new law, that we are exempt. We need greater clarity in the NY law.

The vast majority of freelancers in the US today are either work-for-hire or working under “all-rights” contracts, which means that the publisher owns your work. That’s why we are looking at “copyright protected work,” no matter who owns the copyright, the author or the publisher.

Certain professional workers are already considered “exempt” from California and NYS wage orders, that is the wage and hour laws that determine being qualified for time and half, back pay, and guaranteed minimum wage. This class of professional workers includes many doctors, engineers, accountants, architects, journalists, and artistic professionals who perform work that is original or creative. The ABC test and the minimum wage and overtime protections do not apply.

Yet, because the new CA law is not clear, there is some genuine concern among freelancers that they will lose work from out of state clients who fear having to hire them as employees. One member contacted me to say that she does a regular weekly column for a publication and now with the new law she is limited to only 35 submissions. This is not the only client for this full-time freelance science writer.

We are hearing that Reuters has stopped using freelancers in California, and the president of the Society of American Travel Writers reports that a New Jersey-based company will stop using his California travel writers, costing his members significant income.  A Board member and former President of ASJA said that he lost a potential gig with a public broadcaster as a result of the new law.

Certainly, things will become clearer with time. We understand that the fight to end misclassification is primarily a battle between labor and some of the biggest, most anti-union corporations in the country. There was a major push by labor to get this legislation passed and there is tremendous pushback, with Uber, Lyft and Doordash threatening a $90 million ballot initiative to exempt them from the new law.

But in the heat of this battle, we cannot allow legitimate independent creative professionals, who create copyright protected work, to become collateral damage. As Associate Professor of Law Veena Dubal testified in a Dynamex informational hearing in CA, which laid the basis for the new CA law, the ABC test only applies to wage orders. We negotiate our own rates and cannot claim overtime or back pay. We work on our own time, with our own equipment, and do not work on company property, under a supervisor or on a specific shift. Those creative professionals who are exempt from wage and hour laws are also exempt from an ABC test.

Let me close by making the point that the distinction between employee and independent contractor has nothing to do with technological innovation. The “gig economy” is another name for union busting and driving down the living conditions of all workers, staff and freelance alike. It goes back to the mid-20th Century when the 80th Congress, known as the Do-Nothing Congress, did the bidding of the anti-New Deal, anti-labor corporations and carved out “independent contractors” from the Fair Labor Standards Act, the Social Security Act, and the National Labor Relations Act. Reversing that decision will hopefully soon be the topic of yet another hearing to get creative professionals and other independent contract workers covered under federal and state labor and civil rights law.