You are here: Home / News / NWU Brings the Ebony Fight to NABJ17! 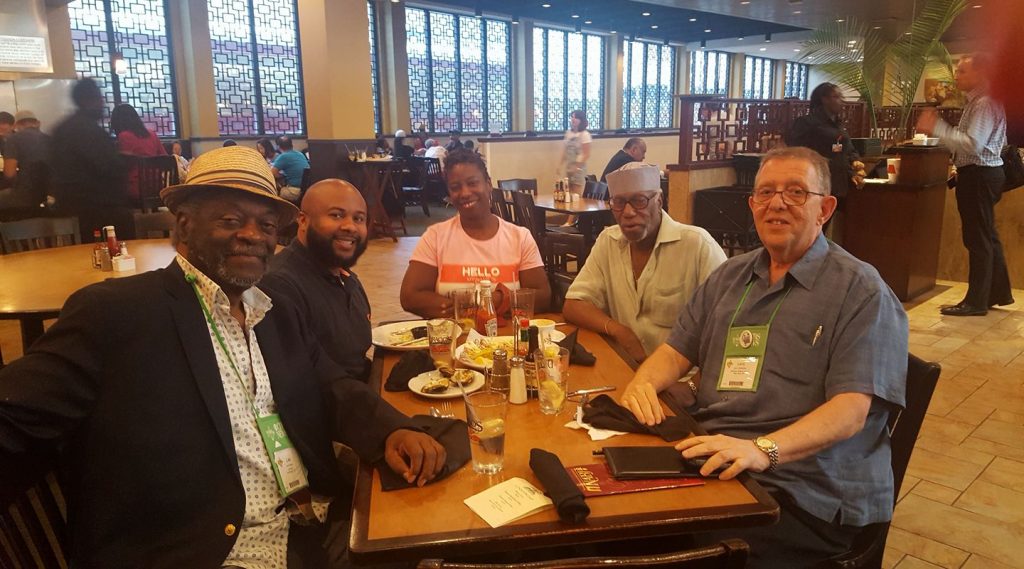 The National Writers Union was well represented at the National Association of Black Journalists (NABJ) Annual Convention and Career Fair held in New Orleans held August 9-13, 2017. NABJ President Sarah Glover and her Board very generously gave our group a great platform to discuss the ongoing campaign to get Ebony freelancers paid.

Prior to their convention, NABJ gave Ebony the Thumbs Down Award for having not paid their freelancers. Also, NABJ offered hardship registrations to unpaid Ebony freelancers so they could attend the conference.

Our group included four Ebony Magazine freelance writers, Tiffany Walden, Anthony Springer, Zerline Hughes and Shanita Hubbard, and NWU President Larry Goldbetter. We all met in person for the first time following scores of emails, conference calls, Tweets and retweets it has taken to organize the more than 40 freelancers who are unpaid and part of the NWU mass grievance against Ebony Media and CVG, the new owners of the 72-year-old magazine. Zerline Hughes, who finally was paid in full after joining the #EbonyOwes social media campaign early on, continues to advocate for her fellow freelancers. Tiffany Walden (thetriibe.com), Shanita Hubbard and Goldbetter were interviewed by NABJ TV, which ran in a loop so all the attendees could get a chance to view it.

We were also given a space to hold a very informal meet and greet for NABJ freelancers and others to talk about Ebony and how to better reach out to freelance writers, illustrators, designers and photographers. Those who came by included NABJ Vice President of Print, Marlon Walker who writes for the Atlanta Journal Constitution, former Detroit Free Press columnist Cassandra Spratling, a news producer-turned public relations professional, a columnist and professor, and a legal writer and archivist who all shared their freelance experiences and discussed questions about contract negotiations, industry expectations, and outlets that have good (and bad) reputations paying their freelancers.

NWU and NABJ, working more closely together, is a very positive development for freelancers and everyone concerned. Author columnist and member Herb Boyd, who’s new book Black Detroit has just been released, was also at NABJ and wrote this great piece in the Amsterdam News.