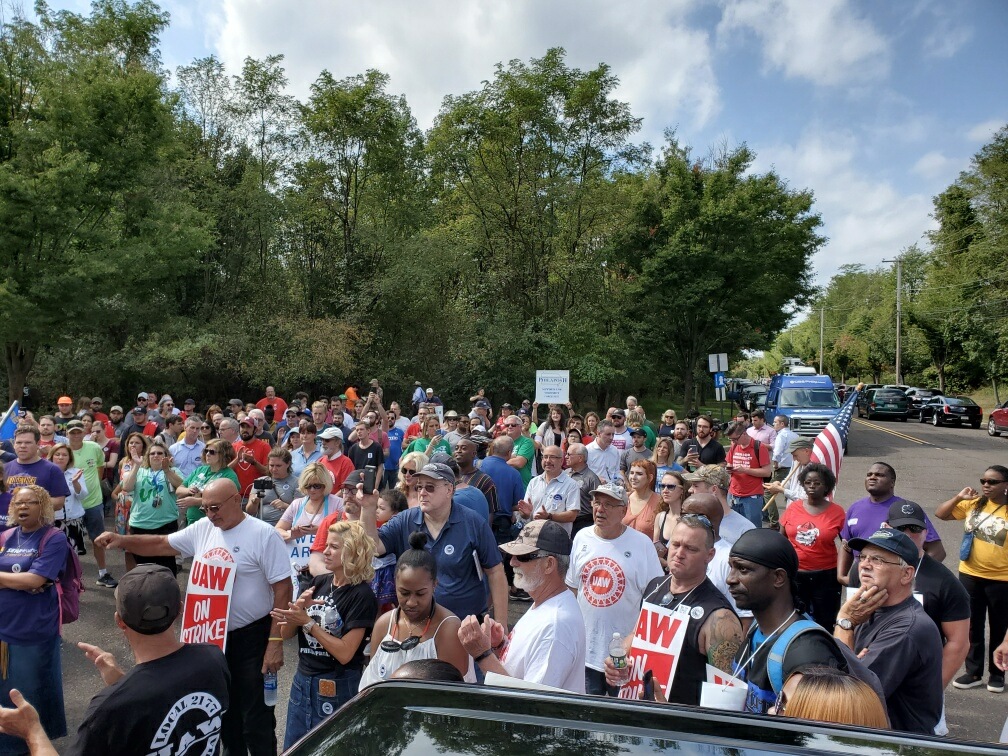 Last Saturday, we hit the road, which stretched out into Appalachia, determined to visit striking GM workers at the Philadelphia Parts Distribution Center. A Turkish friend, Çağatay Öncü, asked to come along. We were nervous because our car has had mechanical problems. We didn’t want to get stranded on the way and miss out on a historical moment of class struggle.

Fortunately, we made it there safely, where groups of young workers and their families had been taking six-hour shifts. Altogether, a group of about 200 of us banded together for a solidarity event with workers, union folks, college activists, locals, and politicians. It was a big turnout. 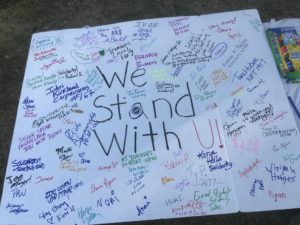 Danny Mendoza, 30, the night shift representative who’s been working at GM since 2008, tells us that the issue of temporary workers is especially important. While there’s only one temporary worker among all 85 at his center, in some GM plants roughly half the workers are temporary. They contend with low wages and precarious hours.

We learn that Tommy, 56, has been in different parts of the company for nearly four decades. “If you don’t go to school, you’ll work at GM,” he says.

“It is a good job,” one of us says, to which he replies: “At least it pays the bills.” Less so when workers are on strike as they have been the last three weeks.

When we mentioned that the steelworkers of Turkey are also fighting for collective bargaining, we saw the value of workers from both countries sharing their experiences. Danny helped us create a solidarity video for Turkish workers with a message from Jay Jay.

“I heard that the steel workers of Turkey are also going through a collective bargaining process, and I want to let you know that we stand together with you. We hope you guys get exactly what you deserve.”

The US workers in the background didn’t just support their class brothers and sisters from Turkey in word; they posed next to a quickly prepared banner that read ‘Good luck Turkish SteelWorkers.’

We spoke to Erin, Tommy’s partner, who showed us a photograph alleged to be GM CEO Mary Barra’s mansion. “Why would anyone need such a house?” Erin asked, while repudiating injustice.

During the strike, workers who earn at least $600 a week have to make do on $250 weekly, distributed from union resources. Some can only get by receiving donations, such as food. Others manage by relying more on spousal or family income, or by working other temp jobs.

Despite support, the strike becomes harder as time passes and unmet needs accumulate. Although the workers are ready and willing to continue, if need be, they want the strike to end soon. They are exhausted. Bitten by flies in the heat of the day, and freezing at night, they persist in solidarity.