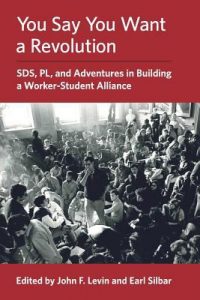 This book is the only thing published so far that illuminates the “other side” of the famous split that tore Students of a Democratic Society (SDS) apart in the summer of 1969.

Rather than focusing on those who soon became the Weathermen, and were never more than a tiny percentage of the 100,000 who considered themselves members of SDS at its peak, the Worker Student Alliance, led by Progressive Labor Party, represented something like half of the delegates to the last convention.

This series of memoirs and reflections are a frank attempt to tell the story of this side of the student movement and it is full of lessons, self criticisms, pride in accomplishment, and personal stories from the rank and file. It is not a “get even” set of memoirs. It was done just before two contributors’ deaths and was sparked by the realization that 50 years had passed and there was some current interest in the events of the period, especially among the young radicals and socialists activated by the campaign of explicit socialist Bernie Sanders and work of Black Lives Matter and #MeToo movements, as well as the recent teacher strikes, among other developments.

It is our hope to contribute to these efforts, as well as to encourage them. We also hope to stimulate useful discussion of the whole movement of the 60’s-70’s in a more self critical and movement-building way than we were able to do back in 1969.