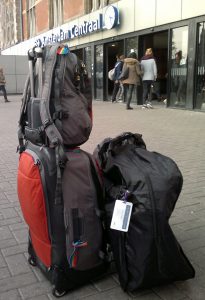 Baggage and bicycle (folded, in black bag) ready for the train from Amsterdam to Brussels.

In addition  to our international connections through the UAW, the NWU is affiliated with three international organizations specifically related to our work as writers.

What are these organizations, and what do they do for us as writers in the USA? Why do we pay dues to them and go to the expense of sending a representative to meetings abroad?

The reason we need a seat at the table is because both print and digital publishing are increasingly globalized. Even if we write and publish primarily for US audiences, our work, our rights, and our incomes are increasingly subject to copyright laws in other countries.

In the print world, some of the largest publishers in the USA are actually subsidiaries of European-based multinational conglomerates including

Even US-based publishers routinely publish books and magazines in multiple countries simultaneously, and they could be deemed to have been “first published” in any of these countries, and then be subject to their laws.

On the Internet, of course, what happens anywhere in the world can affect writers everywhere. If someone puts your work online, it can destroy the market for your work worldwide. “Cloud” platforms typically have global servers, and an Internet company can designate the nominal place of publication of your work—whose laws govern your rights—as being wherever it can get the most favorable copyright, tax, and incorporation laws.

There’s a “race to the bottom” by countries eager to establish the most pro-business laws to attract Internet businesses, and by Internet companies, publishers, and digital “libraries” eager to find, or create, a favorable legal regime, wherever in the world they can, for rights-grabs against writers.

Participation in international coalitions and our presence at meetings where international policy is being made is essential to protect the interests of US writers. If we aren’t there to speak up for ourselves, it’s easy to portray changes in national laws or international treaties as being merely technical updates, without considering their effects on writers’ incomes or on the new business models enabled by new technologies.

Our international work is reciprocal, of course. In our advocacy with Congress and the U S Copyright Office, the NWU has tried to be attentive to how US copyright law affects writers in other countries, such as foreign writers whose work is published in the US or on US-based Internet platforms.

We’ve tried to make sure that foreign writers, who don’t have our presence in the US, or our access to policy-makers in Washington, aren’t ignored when decisions are made in the US that affect their rights and their incomes. And NWU volunteers in New York support the work of the IFJ at the UN in support of the rights of journalists.

IFRRO is a little-known but significant global coordinating body for collective rights management agencies that license “secondary” rights to written and printed work, such as rights to photocopy or digitize books and journals originally published in printed formats. As digitization and rights to “backlist” work become increasingly significant to writers’ incomes, and as self-publishing disrupts traditional relationships between writers and publishers, it’s crucial for writers involved in these changes to have a say in the rules that govern the new digital publishing economy.

IFRRO and its members have worked to establish rights we would like writers to have in the US, such as a “public lending right” to compensation whenever books are borrowed from public libraries.

That may sound like a pipe dream, but it’s the law, following years of organized campaigning in Canada,  Australia, the U.K. and many other European countries.

Through the Authors Coalition of America, the NWU receives a share of revenues from these collective licensing schemes in other countries, primarily for copying by libraries and educational institutions. IFRRO also lobbies internationally against schemes to scan books and periodicals and put them on the Internet without payment to writers or publishers.

IFRRO is the most diverse international organization of writers, graphic artists, photographers, publishers, and licensing agencies for printed and visual works. Participation in IFRRO and a seat on the IFRRO Board of Directors is an invaluable international networking and coalition-building opportunity.

It’s very unusual for a writer from the US to be elected to the IFRRO board. My nomination reflects  international respect for the NWU and our work. It also reflects awareness that more US writers than writers in most other countries have been pursuing new digital and self-publishing business models.

Writers, publishers, and licensing agencies in other countries see themselves moving in this direction, and are curious about what has been happening to writing and publishing in the US. They don’t (and they shouldn’t) want to imitate the US, but they do want to study and learn from our precedents, good and bad.

The NWU has had support in international coalitions from writers’ organizations in some developing countries that might not be expected to choose someone from the US to speak for them. But conditions for writers under cutthroat capitalism in the US have more in common with Third World economies, in some respects, than with social-democratic European countries that provide more of a safety net for freelancers, and offer much more government support for literature, arts, and culture. US writers, like some writers in developing countries, are forced to be more independent and entrepreneurial than many of our European counterparts.

The IAF held a meeting of its member organizations, at which I represented the NWU, on the sidelines of the IFRRO convention in Amsterdam. The IAF also organized a public forum at which a Dutch freelance writer and a Dutch digital artist talked about how they earn a living from their work. NWU members wouldn’t have been surprised, but it was eye-opening to some of the other “stakeholders” in attendance to hear from real local creative workers.

The IAF’s advocacy for writers is carried out mainly in Geneva at the World Intellectual Property Organization. WIPO is the UN-affiliated body that administers the Berne Convention and other international copyright treaties.

WIPO is also the body which proposes new copyright treaties and changes to existing treaties. Currently, WIPO is debating proposals for new exceptions or limitations to copyright to allow libraries and educational institutions to copy, digitize, and post books and periodicals on the Internet—possibly without payment to the authors of those works. Even if not all countries agree to these proposals, they could create “safe havens” for book-scanning and digital libraries that could affect writers worldwide.

As a federation of trade unions representing journalists, the IFJ shares the NWU’s union perspective and our focus on being able to make a living as working writers, as well as our commitment to solidarity with journalists (and, for the NWU, other writers) around the world.

IFRRO, IAF and IFJ’s European caucus all have offices and staff lobbyists in Brussels, the seat of the European Union. With the EU considering its own major package of copyright reform legislation, it’s critical for writers abroad, not just those in the EU, to be heard by European legislators. We can’t afford to maintain a permanent presence in Europe, and as foreigners, we can’t have the same influence on European lawmakers as their European constituents can have. But out interests are at stake in Europe, alongside those of of our fellow European writers.

Our participation in IFJ gives us a window we wouldn’t otherwise have into high-level European and international policy-making. The NWU participated in the international conference that launched IFJ’s campaign for authors’ rights in 2000, and has continued to collaborate with IFJ in our advocacy. I was nominated to the IFRRO Board by the IFJ as well as the NWU (both are IFRRO members), and I’ve been participating by Skype in meetings of IFJ’s Authors Rights Experts Group. Following the IFRRO annual meeting, I took the train to Brussels, where I met with the IFJ’s staff — including the staff of their Authors’ Rights campaign — and reported on the IFRRO conference to IFJ’s Executive Committee.

There is much we can learn from the Continental European perspective that authors’ rights (“droit de l’auteur”) are human rights of the creator, some of which (such as moral rights) are inalienable. Copyright in the USA and UK, by comparison, is a property right that can be freely traded, completely separated from its creator, and held by a non-human corporation.

While in Brussels, I was also able to meet with members of the European Parliament with key roles in the pending EU copyright reform legislation, as well as with representatives of various genres of European writers (literary writers, journalists, etc.).

I also made contact with the intellectual property attaché at the US Mission to the EU. The US government’s lobbyists typically support US corporations, not US workers. On the issue of copyright they hadn’t heard from any other US writers. By telling them about our concerns as writers, I was able to keep them from claiming to European lawmakers — as they otherwise would have done — that all US stakeholders are united in support of US publishers and Internet companies.

If there’s one common thread to my conversations with writers from around the world, it’s that writers everywhere face common attacks from traditional publishers, from new-media companies, and from those who want to fill digital libraries with our written work but without paying us. Our only chance at fighting back successfully depends on international solidarity. The NWU’s international work is a small part of our advocacy program and budget, but a vital one.