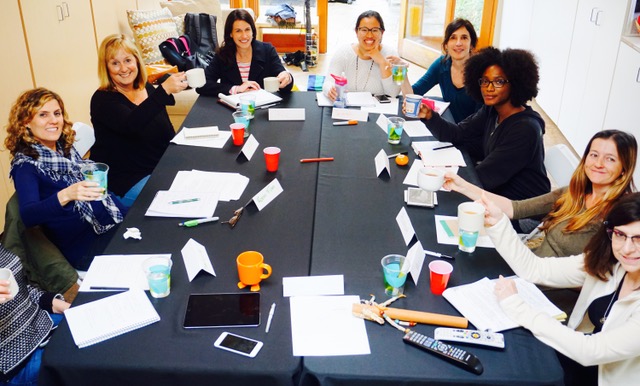 One by one, faces pop up in a grid on a computer screen: Writers from New York, the Bay Area, Los Angeles, and a sprinkling from such far flung locales as Berlin, India and Zanzibar, join a mid-May webinar. My big hair and striped shirt fill up a box beamed in from Long Beach, CA.

Suddenly Good Housekeeping editor Carla Levy appears among us in one of the squares, reddish hair, honey-colored cabinetry behind her. Later we’ll virtually meet Megan Greenwell from Esquire, Ben Greenman from the New Yorker, and two more successful freelancers who share insider tips.

“I’m looking for gripping, amazing, dramatic stories,” Levy told us, adding “like someone who dragged her children out of a burning house.” She expressed her preference for lucid, targeted pitches, and writers who are game to make requested revisions and collaborate with her. Then she listens to some of our ideas, including my tale of a child abuduction, which she finds compelling, but wonders if it would make through GH’s legal vetting. I think it can, and forwarded her a more polished version once the webinar was over.

Levy likes photos with pitches, which gives her additional insights. She’s good with thorny topics, and stories of heroism, such as the woman who was petrified of open water, but rescued a couple caught in a riptide. But no precious pieces about “the experience of becoming a mother.” Save those for your kids. GH pays $1.50 to $2/word.

After her session, Levy’s box dissolved, and webinar host David Hochman, who founded UPOD Academy in 2011  webinar, teed up the next guest. His website declares UPOD is the place where “Where Freelance Superheroes Learn to Fly.” I’d heard good things about him from a colleague who leads frequent tours to Italy, and sells a lot of stories on that subject. The webinars are less than $200, and in-person workshops about $100 more.

Hochman, who’s also a freelancer, says some of the best things to come out of these writer-editor mash ups are book contracts; full-time jobs; radio interviews; people being flown across the country for a photo shoot with Oprah’s magazine; and a $250,000 contract for a writer who shared an idea that was off the cuff, he said.

While it seems it would require heavy lifting to schedule big gets like Malcolm Gladwell and Susan Orlean, not so, Hochman reports. “I just ask. That’s part of the mindset. UPOD (an acronym for Under Promise, Over Deliver) is about asking for 100 percent of what you want, from 100 percent of the people in your life, 100 percent of the time,” borrowing a quote from another UPOD muse, author David Richo. And thus Levy, Greenwell and Greenman

And thus Levy, Greenwell, Greenman and a long list of illustrious UPOD speakers, many of which are available as downloads…

So Greenwell of Esquire. She’s executive features editor for both online and print editions.

“I tend to love the darker heavier stories like the Canada Creep Hunters, which are the amateur version of How to Catch a Predator,” she said. But she also likes the goofy stuff, like a story she wrote on the We Rate Dogs Twitter account.

“I’m the first female features editor in a long time…. My freelance roster is 70 percent women, 30 percent men, and most are not white guys, which is personally, super important to me,” she noted.

A joke among her editor friends these days is that every pitch starts with “In the Trump era, which gets really annoying.” However if you could really deliver good political stories right now, she might be your buyer. In fact she’d be happy to hear from a strong writer who said, “This is a story I can report and write really quickly and [that story was] incredibly in the moment.” But don’t pitch someone for whom you don’t have access or you’ll end up on her $#!+ list. She pays in the $3500 to $4000 range for an online feature, which could go up if it also appears in the magazine.

And then there’s Ben Greenman. (Actually there were two other writers worth noting—Eric Spitznagel, a very successful freelancer, and Jennifer Gregory, who earns a good living selling branded content, which I would like to double back to at a later time.)

Greenman of the New Yorker focuses more on writing books these days than magazine articles. He puts in about three hours a day on the former, and gets the synapses clicking by reading something good for 45 minutes to an hour. “Just things that interest me, not anything connected to what I’m working on.”

Around 2005, he started researching what he thought would be a bio of 70’s star Sly Stone, but decided to write a novel based on the subject instead that is called, Please Step Back.

“That’s how I came to the attention of Quest Love’s people and they hired me to write for him. (They’re on their third collabo.) Then I wrote for George Clinton, Brian Wilson, and came around to doing the Prince book (Dig If You Will a Picture),” which he calls “a mix of memoir, critical essay, and academic-like theory of his concerns as an artist.”

Greenman said that some celebs use their fame as leverage to get more of the money and more of the control on a project, but some, like Wilson, who has more money than God, didn’t care about those things so much. “He has a bookshelf of books written about him. With this one, it was a correcting-the-record memoir, telling the story of that last third of his life.”

Hochman says the value of his webinars—beyond potentially giving participants access to higher-placed editors—is giving freelance writers access to one another. After a webinar or workshop, participants continue to use one another as sounding boards.

“UPOD connects the disconnected. You feel like somebody has your back, holds you accountable. It takes some of the loneliness and solitude out of freelancing, and gives you another human voice out there.”