You are here: Home / News / George Floyd and Moving Heaven and Earth 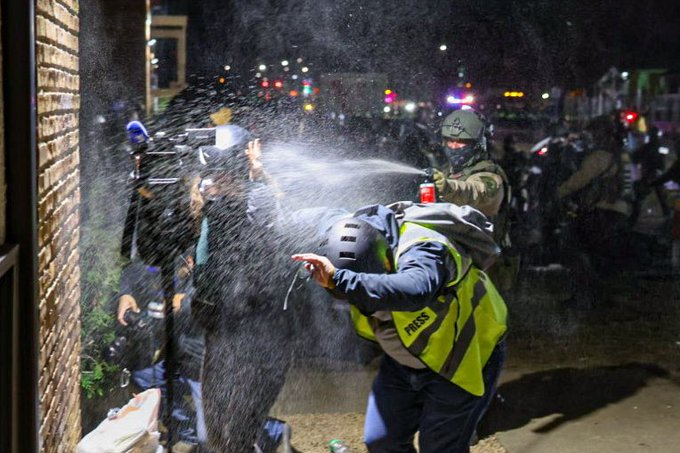 @AFPphoto journalist @EleonoreSens and another member of the press are maced by Minnesota Police in Brooklyn Center, MN

Let’s face it. It took millions of people taking to the streets for a solid year, thousands of arrests and literally moving heaven and earth to get the conviction of one racist cop who murdered George Floyd on camera, for the whole world to see. This is hardly balancing the “scales of justice.”

In fact, the police have doubled down on their racist terrorism, killing 10 people during the course of Chauvin’s trial, including 20-year old Daunte Wright in nearby Brooklyn Center, 13-year old Adam Toledo with his hands up in Chicago, and 16-year old Makhia Bryant in Columbus, OH on the very day of Chauvin’s guilty verdict.

Despite the chorus of talking heads in corporate media, Chauvin is not a bad apple. The whole barrel is rotten. What’s more, few if any corporate media outlets bothered to report that in Brooklyn Center, after the racist murder of Daunte Wright, police not only attacked anti-racist protesters using flash-bang grenades and tear gas in a residential Black neighborhood, but they attacked journalists covering the story as well.

On Friday, April 16, “more than 130 protesters were arrested, and journalists were also caught up in the crackdown and detained, with some pepper-sprayed and others required to be photographed and have their IDs photographed.” (MPRNews, 4/17) Acting with total impunity, the police detained and used pepper-spray on journalists, violating a temporary restraining order issued just hours before the protest by U.S. District Judge Wilhelmina Wright, prohibiting police from arresting journalists, forcing them to disperse or using force against them.

After a meeting between MN Gov. Tim Walz and several media outlets, more than 25 media organizations signed a letter to state officials saying, “law enforcement officers have engaged in widespread intimidation, violence, and other misconduct directed at journalists that have interfered with their ability to report on matters of intense public interest and concern.”

The year-long pandemic has exposed the massive racist inequality in every aspect of life in the U.S. More than half a million have died, tens of millions are out of work, millions of students are falling behind, and an army of Nazi’s stormed the U.S. Capitol on January 6. This inequality is enforced with police terror. The recent wave of police killings, coupled with attacks on journalists covering anti-police and anti-racist mass actions, reflect a system in crisis. It will take much more than sending Chauvin to prison to build the anti-racist world we need and desire.  On Saturday, May 1, workers and youth will be marching around the world. Let’s join them!