You are here: Home / News / Solitude to Solidarity at Oregon AFL-CIO Convention 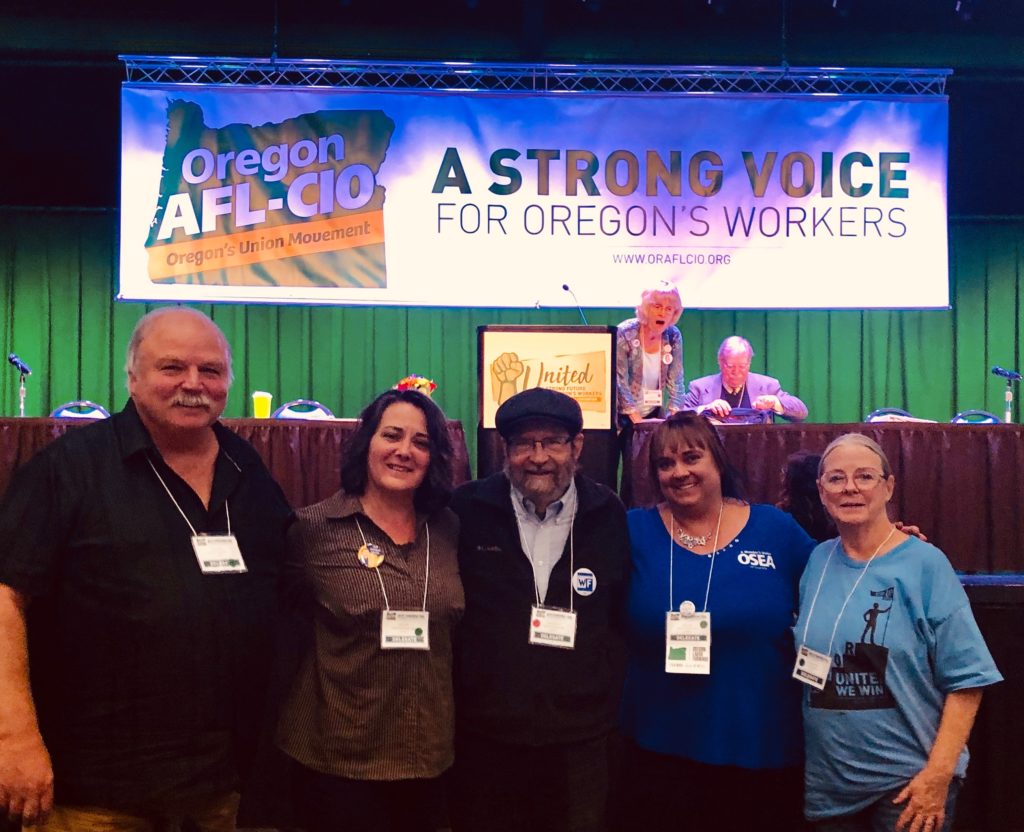 “National Writers Union? We don’t have that.” As a first-time Delegate to the 2019 Oregon AFL-CIO Convention, I arrived not even knowing my Oregon NWU siblings and the registrant hadn’t heard of my union. By the time I left, I felt connected to my union chapter and the Oregon labor movement.

“What did you think of your first convention?” asked the other NWU Delegate, Stefan Ostrach, as we said our goodbyes.

“It was just what I’ve been looking for, actually.”

The convention was three days in the company of people who share my concerns and about pay rates, working conditions, and equity. Electricians, city workers, and letter carriers listened to me talk about how changes in media and publishing affect writers. I was able to learn some specifics of the challenges that matter to them. Together, we marched in support of equal pay for women at Fred Meyer stores and a fair contract for nurses at Columbia Memorial Hospital in Astoria, Oregon. Many of us talked frankly about wanting more diverse representation in our labor organizations and what we were doing about it. And yes, Oregon Senator Jeff Merkley was there, along with some amazing labor leaders from across the country with great things to say. The speeches were rousing and I learned good information, but it was the working people sitting around me on the convention floor that activated me, made me feel I belonged, and gave me the gift of camaraderie.

The last several years, I have felt increasingly isolated and discouraged about the economic and political position of working people like myself and my neighbors. The last four days among my union siblings in Oregon showed me there is hope yet.

Lura Frazey is a member of the Oregon chapter of National Writers Union, UAW Local 1981. She was a 2019 Delegate to Oregon AFL-CIO Convention. She is also co-author of Life Beyond My Body: A transgender journey to manhood in China, winner of the 2017 Lambda Literary award for Transgender Non-Fiction.