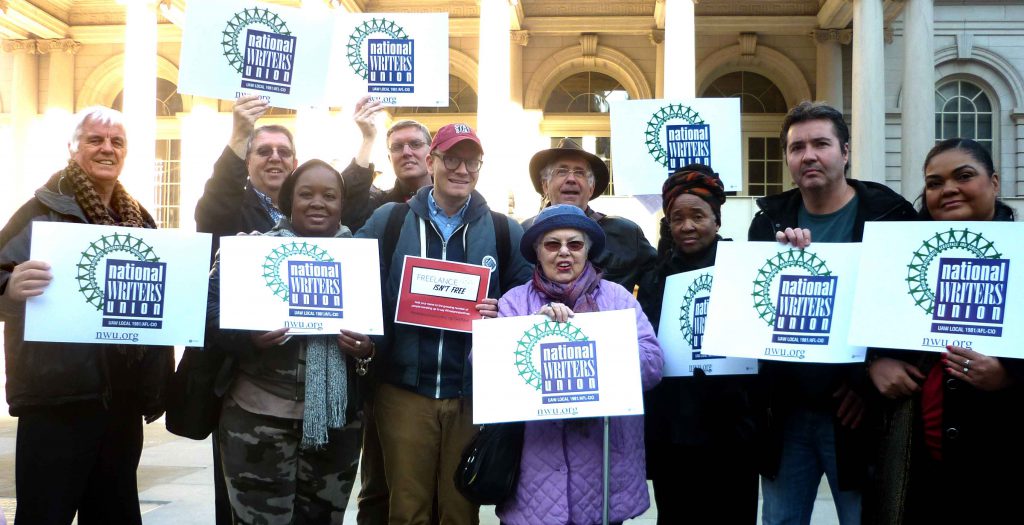 On October 27, the NY City Council passed the landmark Freelance Isn’t Free bill into law. With a vote of 51-0, the City Council made New York City the first in the U.S. to make non-payment to freelancers and independent contract workers a crime. NWU is a cosponsor of the bill and well aware of this issue, having fought dead beat publishers for our members to get paid for more than 30 years. We welcome the new law as yet another weapon in our arsenal.

According to the Freelancing in America 2016 report, there are 55 million independent, freelance and contract workers in the U.S., more than 30% of the workforce, generating more than $1trillion to the economy. Non-payment and late-payments to freelancers in NY State alone, costs us more than $1 billion annually.

The new law will go into effect in 180 days. It requires written contracts for freelance work, and payment in full within 30days of completion of the contract. Freelancers can file complaints against non-payment and late-payment with the NYC Department of Labor Standards. Delinquent clients found guilty of nonpayment in small claims court will face an escalating series of penalties.

This victory is the result of a united effort led by the Freelancers Union and City Councilman Brad Lander, Local 32 BJ, the Domestic Workers Alliance, Make the Road New York and many other Council members, unions and businesses. Over the past year, we shared nonpayment stories, lobbied Council members, held a city-wide Day of Action, rallied at City Hall and testified before City Council. More than 8,000 freelancers signed the Freelance Isn’t Free petition.

NWU thanks the Freelancers Union and Executive Director Sara Horowitz, Council Member Brad Lander and all of our supporters in the City Council, and our many allies in labor, the community and business. We hope this law becomes a model for protecting freelance workers everywhere, and is just a first step in winning full benefits for freelancers, including health insurance, workers compensation and unemployment insurance.