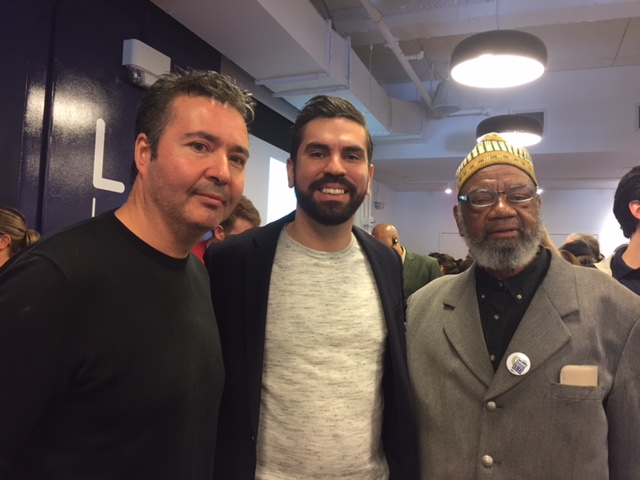 On May 15, freelance workers celebrated the launch of the new Freelance Isn’t Free law at the Westinghouse Building in Manhattan. The Freelancers Union, with the support of the National Writers Union, Make the Road NY, and other unions and freelance organizations, helped push the bill through the City Council to a 51-0 vote last November with a combination of demonstrations, petitions, lobbying and social media.

The new law, the first of its kind in the United States, makes non-payment to freelancers a crime, and those found guilty can face having to pay double damages, attorney’s fees, and civil penalties.  Repeat offenders can be prosecuted in civil action by the Corporation Counsel to recover a maximum $25,000 punishment.

The New York City Department of Consumer Affairs will oversee enforcement of the new law, and Commissioner Lorelei Salas promised to vigorously investigate freelancer complaints. She may have her hands full as freelancers constitute one-third of the workforce. Last year, 70% had late pay or non-payment issues, costing freelancers an average of $6,000 each.

Freelance market consultant Caroline Salas testified that a company owes her $3,800 and has had the court case postponed twice. “This case has cost me 60 plus hours of work and $1,500 in attorney fees,” she reported.  Technical consultant and actor Xavier Fan said that a company refused to pay him the agreed-upon fee for his work. After several rounds of negotiations, the firm made him an insulting offer. In order to maintain his dignity, Fan said, “I ate the entire loss.”

In her victory speech, Sara Horowitz, the Executive Director of the Freelancers Union, emphasized “The law gives freelancers the right to a written contract, timely payment, freedom from retaliation and discrimination, the right to file a complaint with the Department of Consumers Affairs, and you can sue for damages.”

In an interview with this writer, Horowitz applauded the National Writers Union for its ceaseless support. “I call the NWU the Courageous National Writers Union. They’ve been fighting for freelancers when others thought the word freelance was a bad word. The NWU has been with us every step of the way to make this law a reality.”

City Councilman Brad Lander (District 39, Bklyn), who was the lead sponsor of the law, said that he intends to push his colleagues to support a bill to protect freelancers’  human rights which would make it illegal to discriminate against freelancers. He called for a push to establish laws in every state to protect America’s 55 million independent workers.

In the press release, NWU President Larry Goldbetter related, “We hope this law becomes a model for protecting freelance workers everywhere, and it is just a first step in winning full benefits for freelancers, including health insurance, workers compensation, and unemployment insurance.”