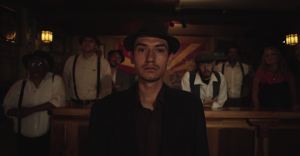 In 1993, the movie Tombstone played theaters with the tagline, “Every town has a story, Tombstone has a legend.”

Only a half hour drive from Tombstone, Ariz., is Bisbee, a town whose story also needed to be told. In fact, the tale had been suppressed for decades. Now, Bisbee ’17 will go a long way to address that. Directed and edited by Robert Greene, the documentary has been making the rounds at festivals of late and is worth seeking out.

During WWI, the Industrial Workers of the World in Bisbee organized a strike against Phelps Dodge, then one of the largest copper producers in the world. The mine owners teamed with local leadership to round up of about 1300 strikers, their family members, merchants who catered to them, and the occasional bystander, and put them up on cattle cars without food and little water, deporting them 200 miles through the desert to New Mexico. Once there, the deportees warned against returning to Bisbee. The deportees were eventually housed in camps for refugees from the Mexican revolution and over the next few years, they moved to other parts of the country. Few returned to Bisbee.

Though Bisbee ’17 is a documentary, it doesn’t hew to the Ken Burns’ school of storytelling. Instead, much of the narrative follows residents as they prepare for a commemoration of the 100th anniversary of the event. That includes talking to families whose relatives were part of the “citizen’s league” that enforced the deportation. Many of them, and this is the most jarring aspect of the film, continue to justify what was done. Hearing someone rationalize such a large scale abuse of human rights after a century of reflection makes one wonder how we can deal with ongoing issues now.

There are also staged reenactments of the events, starring modern-day residents. Little attempt was made to close down streets or block out today’s Bisbee. This means that cars can clearly be seen driving on a nearby highway, while miners in turn-of-the-century clothing appear to walk off the job. It’s not the most subtle way of saying that the issues of that day are still with us, but it gets the job done.

The story of the Bisbee Deportation was not just about labor issues, but about capitalism, nationalistic hysteria, and race—most of the striking miners were Mexican Americans or recently arrived Slavic immigrants.

The main theme of the film, and one that makes for an uncomfortable elephant in the room, is how we talk about historical injustice in this country? Are we willing to have these difficult conversations? And when we do, what do we stand to gain?

Ted Prezelski is member of NWU’s Tucson chapter. He previously wrote about the Bisbee Deportation for the Tucson Sentinel.