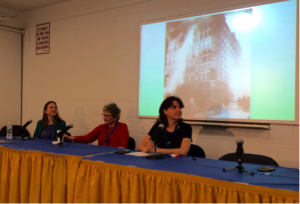 Hofstra University welcomed the 17th Berkshire Conference on the History of Women, Genders, and Sexualities in Long Island, NY, June 1-4. This year’s theme for the “Big Berks” was Difficult Conversations, and NWU members Rose Imperato and Brigid O’Farrell engaged in the discussions.

They joined more than 1,500 historians, writers, teachers, artists, performers, and activists from 35 countries to discuss: environmental degradation, the plight of low wage workers, organizing, incarceration, migration in the Americas, classroom challenges, women of color and the state, magic sex and gender in the medieval west, and lessons from the 2016 election. 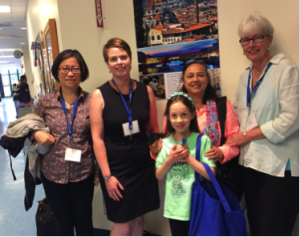 Brigid O’Farrell (right) with fellow scholars, and a young scholar-in-the-making.

Imperato joined a panel of scholars and activists who discussed “The Triangle Factory Fire in American Memory.” They explored how to take the 1911 story of the deaths of 146 mostly young, immigrant women working as seamstresses, into  classrooms ranging from kindergarten to university, by using children’s books, historical photographs, documents, and tours.

The Brown Building of Science at New York University in Greenwich Village is currently on the site where the factory once stood. But the event is only acknowledged by a small, historical plaque. There’s a campaign growing in momentum to have a more dynamic memorial built there.

O’Farrell joined colleagues Xiodan Zhang, Beth English, and Olga Sanmiguel- Valderamma (photo) to discuss their forthcoming book on Women’s Work in the Global Economy (Routledge, 2018), drawing on research from 16 countries in industrialized, industrializing, and deindustrialized regions of the world.

The panel focused on the gendered effects of the recent recession, and the global economic changes for working women in China, the Middle East, Bolivia, Brazil, and Columbia. O’Farrell’s chapter compares the experiences of women in domestic work and skilled construction trades in the US.

O’Farrell learned more about the National Coalition of Independent Scholars and will follow-up on ways NWU can work with them. Imperato announced the new Joseph S. Murphy Scholarships for Diversity In Labor for graduate and undergraduate study at City University of New York:

Brigid O’Farrell is Chair of the NWU Women’s Committee, and Rose Imperato is a member of the NY chapter.