You are here: Home / News / DC Chapter Retreat gets Writers on the Same Page 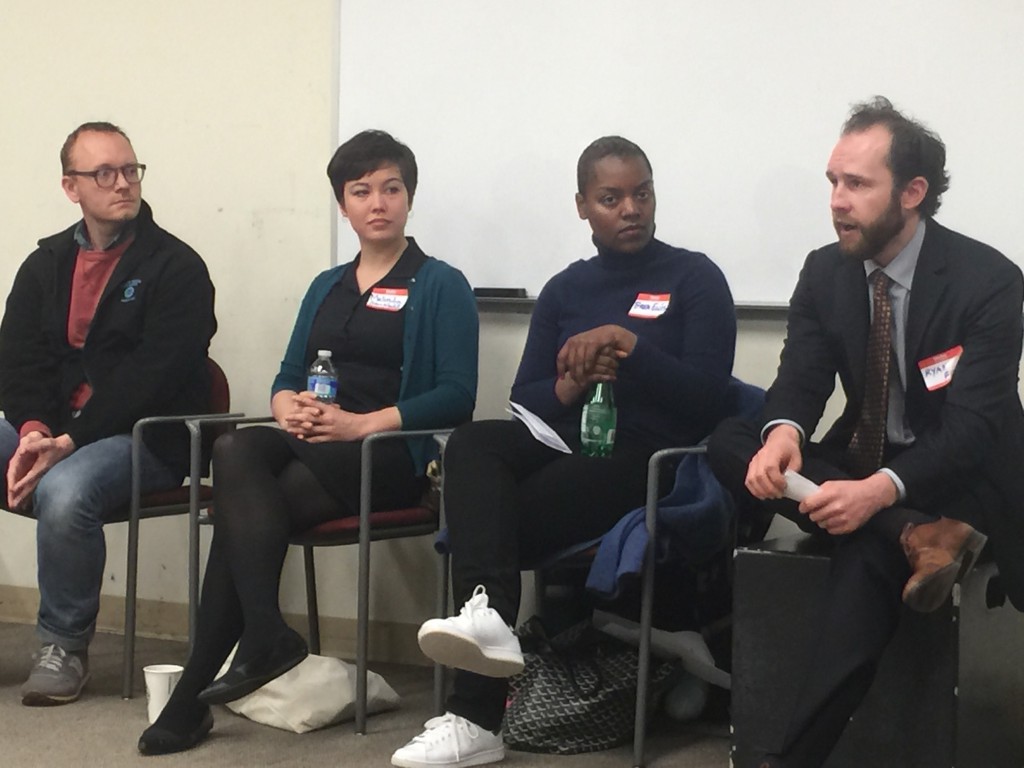 Wordsmiths in and around Washington, DC came together April 9 to discuss new ways to connect and organize around the issues that matter to writers: copyright, freelance pay rates, and fair contracts.

Twenty-four people attended the conference, hosted by the National Writers Union, DC Chapter, and came from DC, Virginia, Maryland, and even New York to take part in the talks. Envoys from the Authors Guild, Writers Guild, and NewsGuild shared what their organizations provide for writers in the digital age.

At the end of the day, one topic emerged as key: the importance of mobilizing both staff writers and freelancers around shared interests in an increasingly precarious industry.

Ryan Fox, editorial director with the Authors Guild, spoke about the Guild’s work advocating for writers to earn a living from their work.

“It’s really a precarious time to be an author — even more so to be an author without a support system,” said Fox, who is based in New York. He noted that, according to an Authors Guild survey, between 2009 and 2015 income for full-time book authors experienced a 30% drop, from around $25,000 to less than $18,000 per year.

Ultimately, it comes down to one issue, Fox said: “authors need to be compensated for digital uses of their work.”

Melinda Fiedler, a DC-based organizer with the NewsGuild, formerly the Newspaper Guild, said her union’s name-change is emblematic of a time of great transition for the news industry, journalists, and other writers. “I can’t imagine being a writer today,” Fiedler said.

Her first job was organizing adjunct professors in Boston. She went on to work as an organizer with health care workers before joining the NewsGuild. But, she said, efforts to mobilize writers and journalists for better contracts and working conditions could gain some takeaways from other labor organizing efforts.

The daughter of an adjunct professor, Fiedler recounted a time from her days organizing adjunct faculty when custodial workers at the school where she was working shared valuable advice with the faculty about how to bargain with the university for better working conditions – as they had done.

She said writers of all types could work together. It’s a new world, Fiedler said. “Let’s make sure we have a voice there.”

Dave Hill, a New York City-based writer and a member of the Writers Guild East and the National Writers Union, noted a rise in the use of temp and freelance writers in the television and film writing industries, sectors traditionally dominated by Guild writers.

Temps are freelancers, a more precarious workforce, and they work for less, driving down wages in the entire industry. “Good standards are being chipped away at by temps,” he said. But instead of seeing them as the enemy, he said, organized writers needed to include freelancers and temps.

“The work is being done by freelancers, so the challenge we have is ‘how do we organize freelancers?’” Hill calls this the “freelance question.” Along with confronting that issue, he said writers needed to get more data to determine what standards for pay rates should be in the new epoch.

“Our big challenge is to figure out the freelance question and figure out what the standards are,” Hill said.

At the end of the talks, National Writers Union DC Chapter leaders hosted a series of working groups to craft action items for enhancing communication among DC Chapter members, activating writers’ networks, and supporting solidarity and organizing efforts in the DC area.