You are here: Home / News / Arizona Labor Packs a Punch 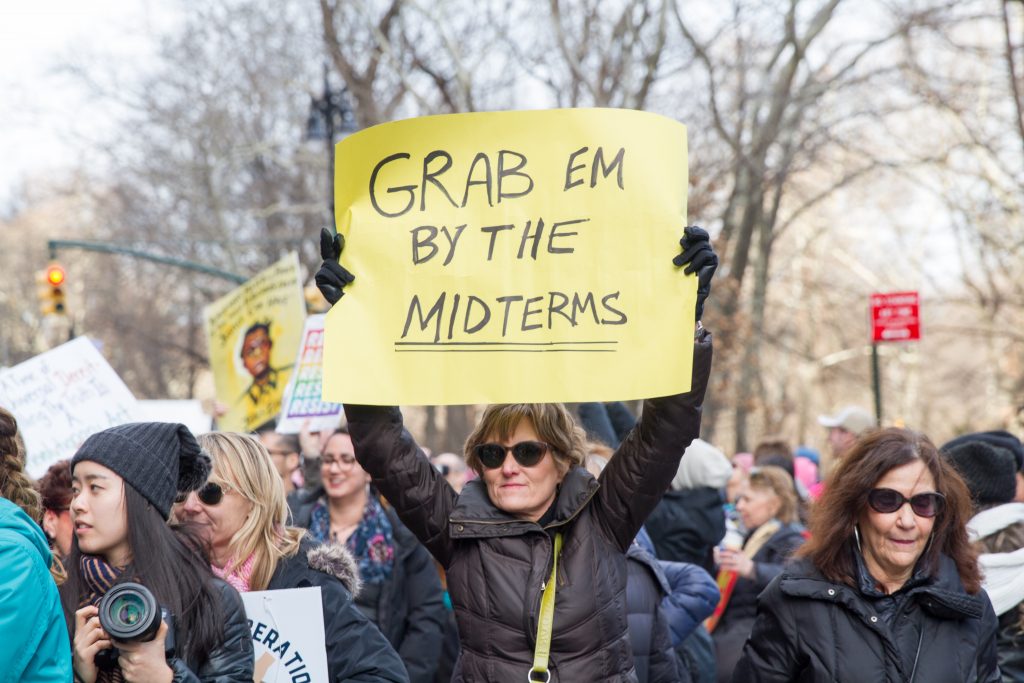 In the run up to the 2018 election, an office in the back of the International Brotherhood of Electrical Workers Hall in Tucson served as cramped headquarters for a new kind of labor campaign. A hand-made poster on the wall compare the two most recent Arizona District 2 Congressional members’ lifetime legislative scores showed why it was important:

Democrat Ron Barber’s record was rated at a labor-friendly 95 percent, while his Republican successor Martha McSally’s record was only 8 percent, according to the AFL CIO. And yet in 2014 Barber lost to McSally  by 161 votes, quite possibly because (as the bottom of the poster notes) “OVER 3,000 UNION MEMBERS DID NOT VOTE”

“When we were looking at the information about [McSally’s] first victory, and we looked at how many union members that were registered to vote but didn’t turn out to vote, we could see that if we contacted our membership…it would make a substantial difference,” said Ryan Mims of the American Federation of Government Employees (AFGE).

Tucson labor leaders became determined to get union members to the polls. Pima Area Labor Federation drove the effort with support from national unions. Mims, born and raised in nearby Benson, took time away from his position as a PAC director for the AFGE region, which includes Arizona, Hawaii, California, and Nevada, to organize a get-out-the-vote effort.

In 2018 election they focused on labor-endorsed candidate Ann Kirkpatrick in the open seat for the U.S. House of Representatives. (Although it had been represented by then-US Senate hopeful McSally, who is a Republican, the district was carried in 2016 by Hillary Clinton, a Democrat.) Turning out votes in the district would also be a boon for another labor-endorsed candidate, Kyrsten Sinema, who was elected to the US Senate in 2018.

Among the first states to pass a so-called “right-to-work” law, conservative Arizona had to make a strong case to attract labor’s resources this year. But the competitive senate race and ongoing labor activity helped.

“We have a foundation that they would be able to expand on,” said Paul Stapleton-Smith, chair of the Pima Area Labor Federation (PALF).

The federation had already been working against the privatization of the Post Office and VA services, and in support of Arizona’s pro-public education Red For Ed effort. In August, AFL-CIO president Richard Trumka paid a visit, followed by vice-president Tefere Gebre in September, both of whom came in support of PALF’s efforts to preserve immigrants’ temporary protected status.

This gave PALF members a better grasp of the issues, while educating them about endorsed candidates. Local union members also went door to door to ensure union member got the message that their votes were critical.

“I got to meet people who were having the same struggles, the same workplace issues, the same community issues,” said Georgia Armstrong, a member of AFGE, which coordinated the volunteer effort. “It was enlightening and uplifting.”

By the time it was over, the campaign had knocked on more than 16,000 doors in the Tucson area with nearly 3,500 in-person conversations between labor members, while phone bankers spoke to nearly 3000 members.

Arizona’s votes took a while to count, but when the November results posted, Kirkpatrick was elected to the U.S. House of Representatives, Sinema was elected to the U.S. Senate, while Katie Hobbs won Secretary of State, and Sandra Kennedy took Arizona Corporation Commission. Of the three, only Sinema’s 38,000 vote margin carried the state by more than the 32,031 door-to-door contacts made in Tucson or by a similar effort in Phoenix. Labor’s made the difference.

Stapleton-Smith hopes that this will be a template for future efforts.

“The data indicated if we worked like holy hell, we’d build a foundation to set us up for 2020,” said Stapleton-Smith. “We accomplished that.”