President Obama told those gathered in the East Room: “We should be making it easier, not harder, for folks to join a union.” Yet he cautioned that those who would organize have to take into consideration pushback from corporations, “You can’t just keep on doing the same things, thinking you’re going to get a different outcome.” 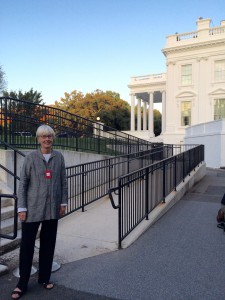 O’Farrell at the White House.

Hamilton Nolan, the Gawker writer who spoke at the August NWU Delegate Assembly about his publication’s successful organizing efforts, cautioned: “No savior will be coming down from Washington to win the class war. So we have to win it ourselves.”

The daylong session closed with the President joining a Town Hall Meeting moderated by Michelle Miller of coworker.org, who asked the President questions that had been sent in on-line; she also engaged the audience for some of the answers.

Sara Horowitz, founder of the Freelancers’ Union, pointed out that 53 million Americans are independent contract workers, and roughly 70 percent of them don’t get paid for their work at some point in their careers.

She spoke about the #FreelanceIsn’tFree campaign, adding that legislation is being proposed in New York City that would require companies to provide written contracts for freelance workers that would include shorter wait times for payment and harsh penalties for violations. Such legislation could set a precedent for the rest of the country.

The Freelancers Union is coordinating with other unions, which may create an opportunity for the NWU to collaborate with them. Check out #StartTheConvo.

Brigid O’Farrell is a member of the NoCal chapter of NWU. Her IFJ press, which freelancers can only get from NWU, helped her to gain access to the summit.