You are here: Home / News / World Press Freedom Day at the UN 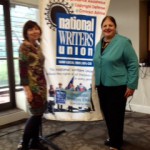 NWU’s Lindsay Curcio and Alexandria Faiz at the UN.

Dr. Elizabeth Carll, president of the CCCUN, served as moderator, while Alexandria Faiz, an NWU Trustee, closed the event by bringing attention to the End Impunity for Crimes Against Journalists campaign.

Along with NWU President Larry Goldbetter, Faiz represents IFJ at the UN’s Economic and Social Council non-governmental organization. In this role, the two work with various UN agencies and global organizations to foster support for the international organization’s resolutions to defend freedom of the press.

This is the second year that the NWU, IFJ, and Metro NY Labor Communications Council have worked with CCCUN to organize an event at the UN. Program co-sponsors included the Human Rights Congress for Bangladesh Minorities, the International Council for Women, and the Earth Society Foundation.