You are here: Home / News / Women’s Committee Report to the 2017 NEB Meeting 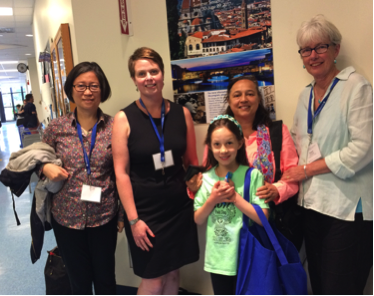 “Empowering Women in the Workplace” was the theme of this year’s 41st International United Auto Workers (UAW) Women’s Conference at the Walter and May Reuther Family Education Center in Black Lake, Michigan, August 6 -11. The three core workshops were collective bargaining, grievance handling, and sexual harassment.  President Dennis Williams, Vice President Cindy Estrada, and Region 9A Director Julie Kurshner all spoke. Additional sessions included a grassroots water rights activist, political action, and a mini-session on generational differences and their impact on the workplace.

The 300 sisters, and several brothers, came from Michigan, Ohio, and Indiana, but also from Alabama, Kentucky, and Texas. There was a good mix of age, race, and ethnicity. They were car assemblers, submarine engineers, apprentice electricians, machine operators, foundry workers, and diesel locomotive assemblers. From Region 9A, they were also legal aid lawyers, graduate researchers, and university staff. Kushner’s talk focused on innovative organizing in non-auto areas. Most were surprised to learn that there is a NWU in the UAW.

The conference sparked new ideas for NWU collaboration with other UAW locals: a lawyer who writes mystery novels, one of the few women in a foundry who wants to write her own story, an auto worker who is trying to capture the history of her family in her local, an assembly line worker who proof reads manuscripts for best selling authors. Graduate students are potential members for NWU when they leave their UAW locals.

The UAW introduced a new workshop on sexual harassment called “Standing With Our Sisters.” It began with long-time UAW leader Dottie Jones, retired, who told the history of the early days developing a sexual harassment policy for the union. The workshop reviewed historical documents, legal definitions and current examples of the problems, as well as solutions through informal conversations, collective bargaining, grievances, and legal actions.  With promises of confidentiality, women told their own stories and role-playing scenarios including the brothers were used to address the realities of sexual harassment on the job today.

This workshop could be the starting point for developing a strategy for our campaign with the International Federation of Journalists to “End Gender-Based Violence in the World of Work.”  A recent survey by the International Women’s Media Federation found that among women media workers: one-fourth have experienced acts of physical violence; half have experienced sexual harassment; and three-quarters have experienced intimidation, threats and abuse. This campaign and the tool kit, linked to the proposed convention before the International Labor Organization to stop gender-based violence are now available at: https://www.ifj-stop-gender-based-violence.org/know-more. After the conference I drafted some ideas for the UAW international office to contribute to the Global Union effort to gain support for the proposed ILO convention.

I was able to meet with staff from the Women’s Department, Education Department, and the International Department and suggest these follow-up steps:

The AFL-CIO is looking for employers to put pressure on the US government to support this ILO convention and Cindy Estrada and Mary Barra, GM president, could be a powerful team, but this is going to take some time.

This campaign also has the potential for being an organizing tool on college campuses with teaching assistants and grad students, as well as undergraduates, because sexual violence is a major issue on campuses.  It would be helpful to discuss this with Julie Kushner for her thoughts even though she is retiring.  I met the new Region 9A deputy director Beverly Brakeman and we should talk to her as well.

The ILO has sent out a questionnaire to employers, unions, and governments due the end of September.  The AFL-CIO is drafting a response, but the UAW does not seem to be involved.  The ILO will put out a report with recommendations on the convention for their meeting next June.  This is a very slow process, but it would be great for NWU to have a proposal under discussion for the UN Commission on the Status of Women meetings in March and some general direction before the June ILO meeting.  Some kind of supportive resolution for the UAW convention in June would be great, but I don’t know if that is possible.  This is a lot of work and I think we would have to get support from the region.

I don’t know what prompted the development of the new UAW sexual harassment workshop or how it is being disseminated.  It is also an issue highlighted on the web page. At a minimum we could send out a questionnaire to our members for their thoughts and experiences on this issue, but I increasingly think we would be in a stronger position for the IFJ if we could draft something that would be relevant for other locals in Region 9A. We could encourage members to write op eds, articles, and letters to the editor.

I now have the contact information for the California Local 2865, UC Student-Workers Union (12,000 members), and Local 281, Union of Post Docs (6,500 members).  They were not represented at the conference.

Plan to get support for at least two NWU members to attend next year and hopefully have something they could present on the IFJ Stop Gender-Based Violence at Work Campaign.