You are here: Home / News / Why I Joined NWU After Retirement 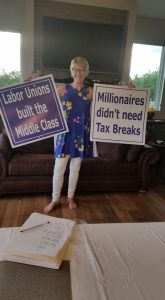 It’s hard for me to describe how empowering those words feel after a 35-year career without the safety net of union membership. But as a writer, let me see if I can tell you my story in 550 words or less.

When I took a $13,000/year job as a reporter in a small television market in the Midwest in 1983, union membership was not an option. Back then, the story of a past attempt to organize weighed heavily on my new co-workers and our competitors AT ANOTHER MEDIA OUTLET? down the street.

That effort resulted in the dissolution of a newsroom by a family that owned one of the three network affiliates in town. People lost their jobs, reporters scattered to new markets or left the industry altogether. Others stuck around and fought. The owners eventually backed down and news coverage returned. Unfortunately the prospect of a unionized television market died.

For 35 years I negotiated my own contracts without the benefit of an agent, lawyer, or union. I agreed to accept smaller paychecks to insure my co-workers wouldn’t be laid off, and endured salary freezes because I believed I had no other options.

To “get the story” many of us worked overtime without being compensated for it. I gave up countless weekends with my family to represent the station, and watched helplessly as various owners clawed back benefits. We were expected to come in sick to get the job done. When I gave birth to my son, I only had three weeks maternity leave.

As the Ghost of Unionization Past hovered, I was spooked and simply took what was offered to maintain my job and protect my family’s security.

I often think of the bravery of those who stepped up and challenged the boss who controlled the airwaves in the 70’s in a financially lucrative television market. A market that today pays entry level reporters an estimated $27,000/year under short-term, boilerplate contracts.

I wonder how different conditions might have been for this new generation of talented, hard-working journalists had brothers and sisters been successful in their earlier attempts to unionize the newsroom.

Over the years I reported on strides made by unions to improve living conditions on behalf of the middle class. I lost heart reading of the decline in union membership nationwide. I cheered when my son and his co-workers won the right to collectively bargain. I cheered again when my daughter-in-law took a position within her union. I give thanks knowing my 93-year-old mother continues to enjoy a small union pension to help cover her out of pocket medical expenses.

Those contracts I signed every two or three years did not allow me to take a political stand, voice my personal opinions, or march in protest against injustice.

When my final contract expired, I retired and joined the Minnesota DFL, and became active in my local unit. I marched in the Women’s March in Washington. I’ve run for political office. I’ve joined the ACLU and the NAACP. As my finances allow, I support other political candidates and various non-profit organizations.

The chains of a nonunion contract no longer bind me. I am free to speak my mind in public, debate controversial issues, speak truth to power and yes, join a union.