You are here: Home / News / We’ve Been Here Before 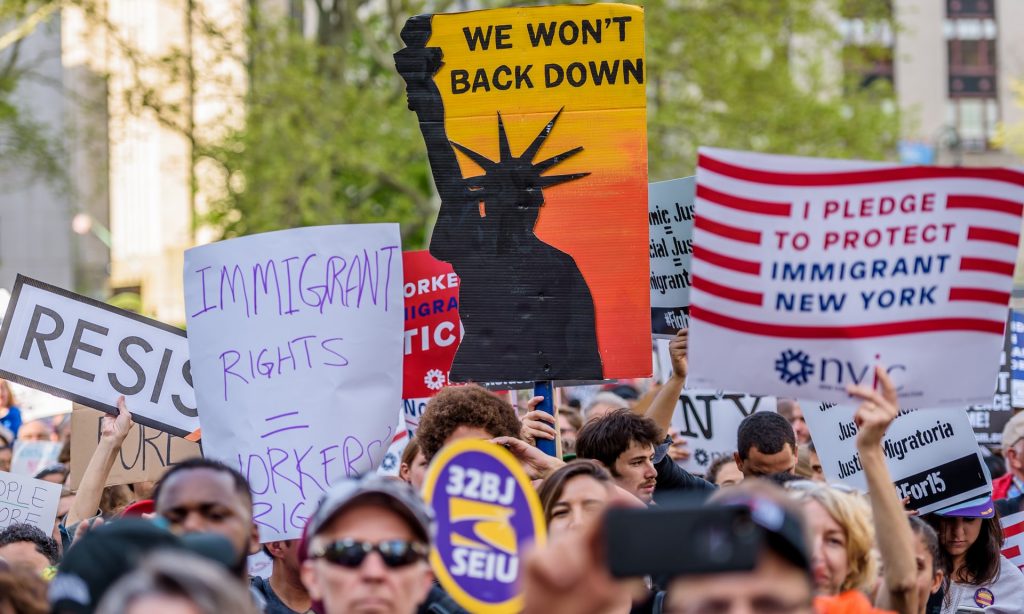 The events of the past few weeks have felt almost overwhelming. Whether its the mass kidnapping of more than 2,000 children as immigrant families were torn apart on the Southern border, SCOTUS upholding of the racist Muslim travel ban and the anti-union Janus decision, or Justice Kennedy creating another opening on the court for Trump, maybe “blitzkrieg” is the appropriate term.

And let’s not forget that prior to this, ICE agents carried out two raids at meat packing plants, arresting 90 workers in Tennessee and 140 workers in Ohio. One 20-year old worker told the Guardian (6/29), “We were working in the plant and the agents showed up with machine guns and started taking everyone outside.”

While Trump and ICE are trying to terrorize immigrants and citizens alike, thousands of workers and youth are pushing back. More than 700 demonstrations are planned for Saturday, June 30, that could put thousands of people in the streets. And, frankly, that’s where our strength is.

Working people have faced fascism before, not just in Germany or Japan or Chile, but right here in the U.S. Attacks on immigrants are not a new trick. At one point there was the Chinese Exclusion Act, keeping Chinese immigrants out AFTER they had helped build the railroads. Under Woodrow Wilson, who had the KKK march in his inauguration parade, there were the Palmer Raids where tens of thousands of European immigrants were rounded up and deported, and Sacco and Vanzetti were framed and executed.

In 1939, two ships carrying 900 Jews fleeing Nazi Germany came to U.S. and was turned back by the government. That same year, the German American Bund turned out 20,000 Nazis to a rally in Madison Square Garden. Everyone on those ships eventually died in a Nazi concentration camp.

There are countless other examples, from slavery to Jim Crow, from McCarthy to the black lists and the execution of the Rosenbergs, from black bodies fleeing poverty in Haiti washing up on our shores, to lynchings and mass incarceration to police executing young black men and women. Fascist terror is nothing new to the USA. Many have lived their whole lives under this brutality. Now, it is spreading.

We do not welcome fascism, but we should not fear it! The odds are that things will get worse before they get better. And the truth is, they won’t get better until we make them better, mainly by bringing this fight to our unions, community organizations and houses of worship and rejecting the narrow xenophobic nationalism with international solidarity. As a popular chant goes, “Las luchas obreras, no tienen fronteras.” Workers’ struggles have no borders!