You are here: Home / News / We stand in solidarity with Kurdish journalists in the face of recent attacks from Erdogan regime 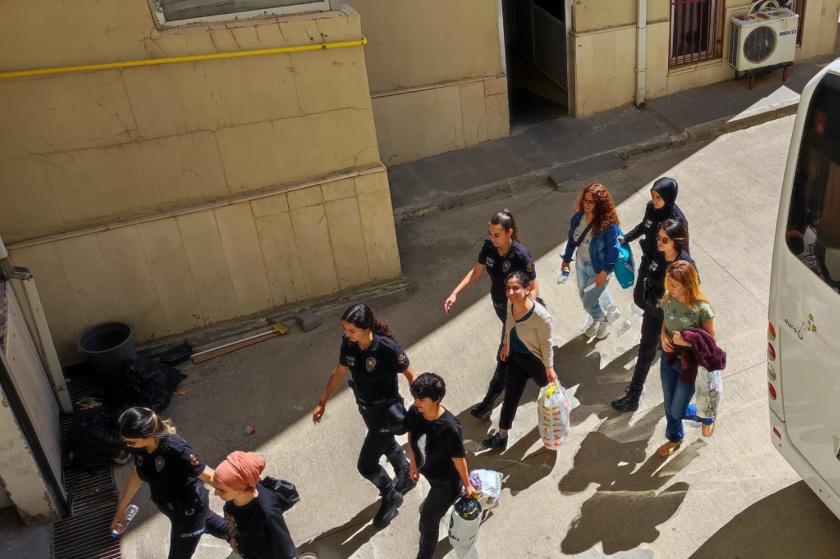 The National Writers Union condemns the recent arrests of 16 journalists by Turkish authorities. We are closely watching the situation as the Erdoğan government is attacking journalists, academics, political organizers and all the social opposition to keep its power. We are particularly aware that the Kurdish people face constant oppression, mass arrest, closure of their political parties and violence imposed by Turkish authorities. These conditions make press freedom a life and death question, especially for Kurdish journalists, and their newspaper Yeni Yaşam. We join with international press organizations in condemning the recent attacks in Turkey.

The criminalization of journalism is a symptom of rising authoritarianism and fascism. This has become a global trend, from the repression of US journalists by the security forces during the George Floyd protests to the recent murder of Al Jazeera reporter Shireen Abu Akleh in Jenin. As writers, freelancers and journalists in the US, we fight for transparency and press freedom and declare our full solidarity with Kurdish journalists. 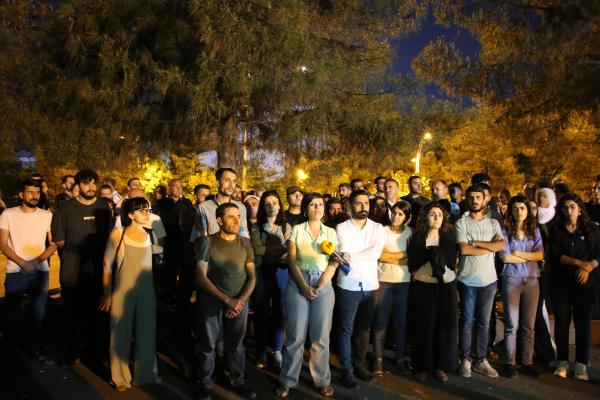 Information on the arrests

Turkey, where human rights violations are at an extreme level against oppressed identities, religions and genders, took another dimension with the police operations against journalists in Diyarbakır on 8 June 2022. In Turkey, where freedom of expression and thought is ‘captive’, the oppressive policies of the government in domestic and foreign policy, especially in the last 6-7 years, have led to thousands of people being exiled, arrested, exposed to police violence, torture and deaths in prisons, etc. Journalists who uncover the oppression policies and crimes imposed by the state, especially in the provinces where Kurds live, have been the target of the state and their governments for years. The murders of journalists committed in the 1990s did not remain only in those times. The house raids that continued in the 90s, years of imprisonment with unfounded allegations, torture, detentions and exiles did not only remain in that period and still continue today. For example, the murders of Armenian journalist Hrant Dink (January 19, 2007), and Kurdish lawyer Tahir Elçi (November 28, 2015) are murders that have resulted in death in our recent history and are known to the world public, but are still not enlightened. The total number of journalists and writers currently imprisoned is over 150. According to President Erdoğan, no one is a journalist, except those who work for his own media, everyone is a terrorist.

In addition to the articles about violations of rights we write in our newspaper every day and the pressures of the state and the government, unfortunately, this time we are dealing with 16 of our journalist friends who were arrested by raiding their houses and workplaces. For this reason, we are sending you this article in order to inform you, esteemed press organizations and workers, about this issue. We want to request your messages of solidarity and your views to strengthen our freedom struggle in the field of press.

16 of the journalists who were detained in the police raids on their homes and workplaces in Diyarbakır on 8 June and accused of “membership in an armed terrorist organization” were arrested on 16 June by the Criminal Court of Peace on Duty. 22 people, 20 of whom were journalists, who were detained during the operations carried out by the terrorist police during the hours when everyone was asleep, did not testify to the police, who unlawfully conducted technical and physical investigations against them, by exercising their right to remain silent at the Anti-Terrorism Branch Directorate, where they spent eight days in detention. Journalists, who used their right to remain silent during the statement-taking process at the Police Department, were brought to the Criminal Court of Peace after their statements were taken at the prosecutor’s office. The journalists, whose statements were taken again at the Criminal Court of Peace, denied the allegations against them and said that they were only doing journalistic work.

They were arrested in the middle of the night 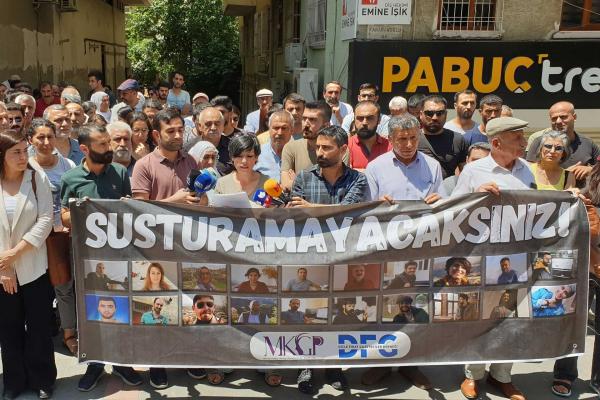 What were the journalists accused of?

According to the police, prosecutor and court records we obtained, we see that during the interrogation our journalist friends were asked why they made a program for Sterk TV and Medya Haber TV, the statements they used in their programs and their phone conversations with news sources. The following statements were included in the arrest request sent from the Diyarbakır Chief Public Prosecutor’s Office to the Criminal Court of Peace: “When the television channels named Sterk TV and Medya Haber TV, which broadcast under the control of the PKK/KCK terrorist organization, were followed, it was determined that the suspects in our province were making programs for both television channels. “

Stating that “PKK propaganda and criminal elements” were detected in the programs broadcast on television, the prosecution claims that units under the name of the Press Committee were formed within the KCK organization and that the suspects work under this unit. In the letter of the prosecutor’s office, the statements of a person who escaped from the PKK and surrendered to the security forces, “When a plane takes off from Turkey, information is provided via Sterk TV and Denge Kurdistan radio” is also included as ‘evidence’. According to the minutes we have, the members of the police, who followed our journalist friends technically and listened to the phone calls, attempted to produce evidence through our friends indirectly and abstractly, when they could not find any evidence to accuse. The police, who try to criminalize the press organizations they work for or the content they produce, consider the news of warplanes belonging to Turkish soldiers departing from Diyarbakır and carrying out civilian massacres in Iraq/Southern Kurdistan as intelligence information. These flights, which are newsworthy especially in the Middle East press and take place in the programs, were for some reason seen as a crime factor on the programs not presented by our friends and became one of the grounds for arrest.

Another reason for arrest mentioned in the minutes is the communication of our friends with news sources. These sources were also tried to be shown as a crime element and took place in the investigation of the prosecutor’s office. The murders left unsolved by the state in the 90s in Turkey and especially in the provinces where Kurds live, are still on the agenda as a current issue, as is known by the world public opinion. The communication and news of some of our journalist friends with the relatives of the disappeared took place in the minutes as an organizational relationship and were questioned. The tablet belonging to the child of our journalist friend Ömer Çelik, who has epilepsy, was confiscated and served to the press as an organizational document by Yeni Şafak Newspaper, a press affiliated to the government. We are very serious. The game tablet belonging to his child was seized only as digital material in our friend’s house. It’s available in the minutes. In the same newspaper, houses which were not raided were published as raided, and the PKK flag, which could not even be found in the police reports, was served as if it had been found in our friends’ house.

The right of expression and defense was usurped by bringing a confidentiality order to the file, which was shown as the reason for the detention and arrest of our friends. The prosecutor’s office and the court did not disclose the exact reasons why the journalists were detained and arrested. According to the minutes we have, the most concrete evidence of the state is as we listed above. According to the current and previous press and political case files, this confidentiality decision points out that the state is trying to buy time to create false evidence, and will try to buy time to change public perception.