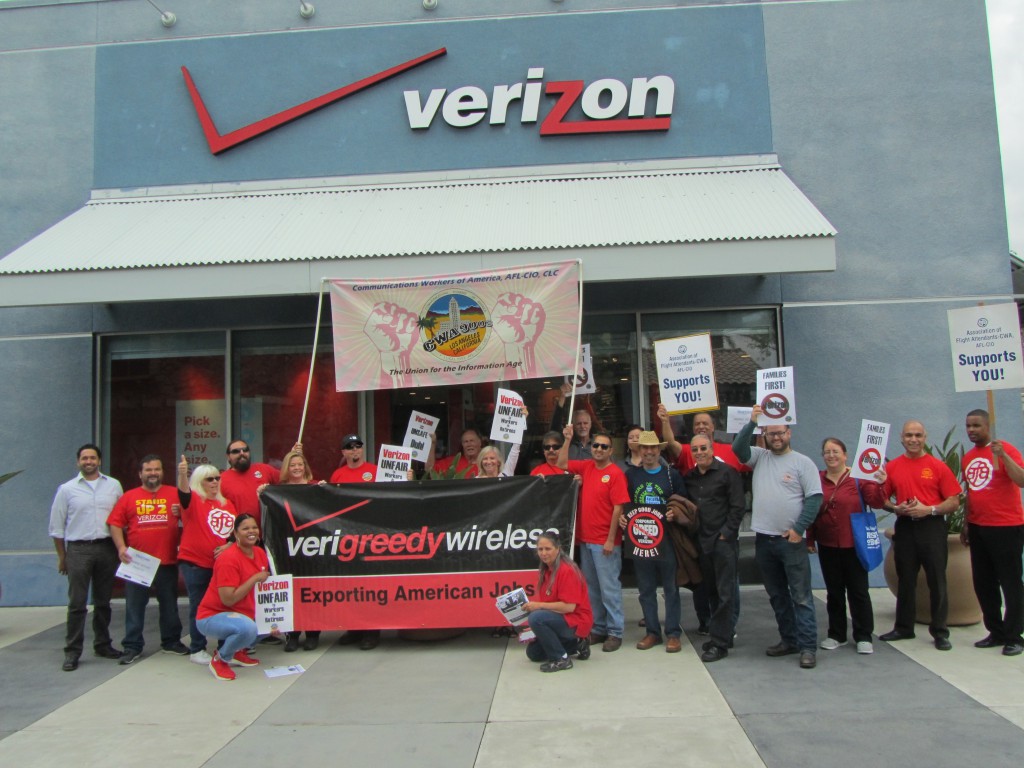 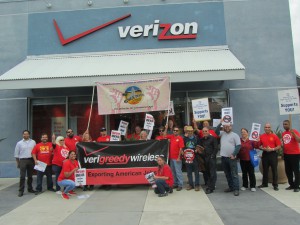 Members of several unions, including the NWU, stood in front of a Verizon store in Burbank, CA, on May 5 to support the nearly 40,000 striking Verizon workers from Massachusetts to New York to Virginia. Most of the strikers are represented by the Communications Workers of America (CWA).

Those who came to show their support included members of the Association of Flight Attendants, Office and Professional Employees International Union and the American Guild of Musical Artists.

The workers are taking on corporate greed, and have pledged to strike for as long as it takes. The strike, now in its fourth week, is the largest such labor action in the US in many years.

The corporate Goliath has refused to negotiate a fair agreement with its workers, and is eager to move jobs overseas, which would undo decades of progress achieved through collective bargaining.

Verizon workers are not on strike in California, according to Mike Frost, executive vice president of CWA Local 9003. Frontier Communications bought out most of Verizon’s operations in the state, and there are only 186 Verizon employees still left here. He summed up his union’s position on his t-shirt, which read: “United, we bargain. Divided, we beg.”

I asked why the CWA was demonstrating here if there was no strike. He replied: “What the company does in one place, they’ll try to spread … to other places.” He cited obscene corporate salaries at the top as one reason workers are now being denied their opportunity for dignity and respect. Aside from his corporate jet, Lowell McAdams, Verizon’s CEO, alone makes $18 million a year. That’s 300 times what Verizon Wireless retail workers make. Every month, Verizon banks $1.5 billion in profits off of the labor of its employees.

Recalling the famous date of Cinco de Mayo (May 5) on which this nationwide demonstration of support was called, Frost said it was “the appropriate day to take action.” Marisa Remski, president of CWA Local 9003, called in her greetings and appreciation to those gathered.

One young man who was headed into the Verizon store to make a purchase asked what the demonstration was all about. When he found out, he turned 180 degrees, walked back to his car, and left.

Last August, workers began renegotiating their contract with Verizon to protect their right to a union, to push back on the outsourcing of jobs, and to prevent the company from relocating workers at a distance from home. The negotiations have lasted over 10 months, with Verizon refusing to budge on some parts of the contract that would benefit and protect workers.

Tens of thousands of Verizon employees finally went on strike in April. Up and down the eastern seaboard, workers have left their posts to stand up for colleagues, families, and friends. According to the CWA, Verizon insists that layoff protections for employees hired after 2003 be removed from the contract. Verizon also wants to force technicians to work for up to two months away from home.

CWA’s informational flyer handed out at the demonstration read, “Verizon represents everything that’s gone wrong with the American dream: The rich getting richer and richer, while the hard-working employees can’t even get a raise.”

If you would like to sign your pledge to boycott Verizon stores until they meet and settle a fair contract with workers, please do so here.