You are here: Home / News / The National Writers Union and the Freelance Solidarity Project Support the PRO Act 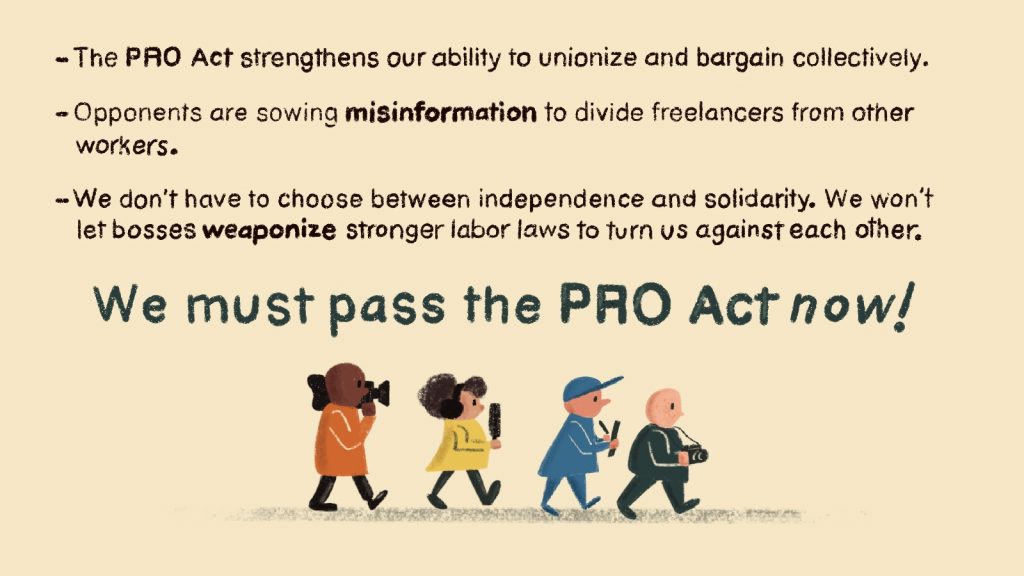 WE SUPPORT THE PRO ACT

The Protecting the Right to Organize Act—or the PRO Act—would be transformative for workers. It would help grow and strengthen unions in the United States by addressing some of the core weaknesses of our current labor laws. For starters, it would:

This isn’t even everything covered in the bill. The PRO Act is ambitious in its vision for a revitalized labor movement.

As a union of freelance media workers (including writers, photographers, audio and video producers, editors, designers, cartoonists, illustrators, animators, translators and others), authors, technical writers, playwrights, poets, and more, we’ve noticed confusion and concern about the PRO Act among some of our colleagues in the industry. A lot of this stems from the so-called ABC Test: the set of criteria used in certain labor laws to determine if someone is an employee or independent contractor.

If the PRO Act passes, freelancers who meet the conditions of the ABC test would be considered employees solely for the purposes of unionization and collective bargaining under the National Labor Relations Act. The bill would not change freelancers’ status under any state labor laws or any other federal laws, including the IRS tax code. That means the only thing it changes is freelancers’ ability to organize together and to collectively bargain the same way W-2 employees can under the NLRA. Nothing about their employee status under any other laws—such as those regulating wages, benefits, or overtime—will change.

Under current labor law, freelancers can form unions like ours, but our attempts to organize are not protected—and employers are even able to file legal charges against us for some of the very same activity protected for our W-2 colleagues. This means we are forced to walk a very narrow line, and in some cases avoid certain types of organizing and advocacy entirely. The PRO Act would change this, and make it easier for us to exercise our civil rights to come together for our common good.

MISCLASSIFICATION IS A HUGE PROBLEM IN OUR INDUSTRY. IT’S A FIGHT WE NEED TO TAKE ON.

We understand the concerns surrounding the ABC Test. Its inclusion in California’s AB5 became a pretense for employers to deny work to freelancers who were legitimate independent contractors. The law was later amended, with input from the National Writers Union, and included a Professional Services exemptions so that true independent contractors could continue to work in the state. Those same exemptions are now built into a similar bill in New York.

It’s scarcity that keeps us locked in place, fighting for the meager pay that defines freelance work, forced to accept the lack of safety net that’s sold to us as “independence.” The unicorn mentality—others might struggle but I’m fine with the way things are; if I play the game just right then maybe I’ll come out on top—only hurts us and keeps us divided.

The forces opposing the PRO Act right now—the U.S. Chamber of Commerce, Koch-funded groups like Americans for Prosperity, and gig giants like Uber and Lyft—are not our friends. When companies weaponize stronger labor laws to justify their race-to-the-bottom wage practices or to cut worker flexibility, it’s those employers who should be the targets of our organizing—not other workers.

While there are real differences in the conditions between freelance media workers and workers in other industries such as app-based gig work, we are all in the same fight; in fact, many freelance creatives are also misclassified app-based gig workers. This is the time to stand in solidarity.

A stronger labor movement is good for all workers. When more workers speak with a collective voice, we can grow our power, grow our demands, and stop fighting over crumbs from bosses.

We are members of the Freelance Solidarity Project and the National Writers Union because we know that worker power is key to building a more just industry and stronger communities. We see the PRO Act as a first step in building the movement we need to win universal health care, affordable and fair housing for all, universal child care, the Green New Deal, and more.

*This statement was updated on 3/29/21 to reflect the wide range of media professions represented among FSP members.