You are here: Home / News / The Fort Point Gang May Day Memorial 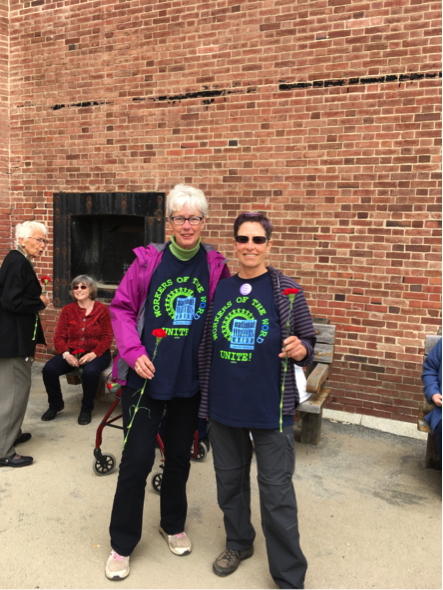 The authors: O'Farrell and Martin. 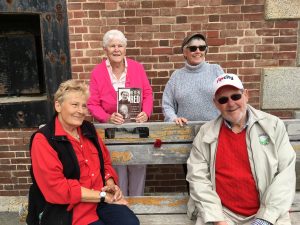 We joined the Fort Point Gang’s annual May Day memorial celebration on May 4 to honor labor leaders, many of whom were members of the American Communist Party. We commemorated those brave souls who were harassed, arrested, and jailed for their thinking during the post-war, McCarthy era, which reminds us to be vigilant so that what happened back then, never happens again.

The Ft. Point Gang formed in 1978 with seven men. It was led by seaman Bill Bailey, a former vice president of International Longshore and Warehouse Union (ILWU) Local 10. They would meet on Thursday mornings, and walk four miles in the shadow of the Golden Gate Bridge. Then they gathered for lunch at a favorite spot, drawing strength from past struggles, while looking towards the future. They grew to 20 or more members, depending on the day. Writer and labor activist Tillie Olsen is credited with bringing women into the group.

This year the Ft. Point Gang honored Loretta Stack, the first woman to have a plaque on one of the several benches at Fort Point, which reads: “Loretta Starvus Stack 1913-2001. Lifelong crusader for peace equality and justice. An incredibly brave and loving person.” Her children, Mary Stack and Joe Silver, attended the commemoration, along with Roberta Bobba, niece of the famous Industrial Workers of the World (IWW), orator Elizabeth Gurley Flynn, and Corine Thornton, 94, a member of the gang, and an activist for many years with School of the Americas Watch.

Loretta Stack started work in a textile factory in Connecticut when she was 14 years old. “As an adult, she came west and got involved with the YWCA, which was a political thing,” her daughter Mary recalled.

Stack became a leader of the Communist Party in Northern California, and in 1952 was arrested, tried, and sentenced to five years in prison for “inciting women to take up arms in support of socialism.” Seven years later, on a second review by the Supreme Court, her daughter relayed, “Earl Warren, who was an amazing chief justice, said, ‘This period is over in America.’ He didn’t acquit them, he didn’t pardon them; he threw the case out, and so they were set free.”

While many like Stack left the Party, they remained strong labor activists in the fight for social justice, and represent a generation of people who sacrificed much in the service of justice and equality. Every year on the Thursday after May Day, the Ft. Point Gang gathers to read aloud the names of those who have gone on, and to toss red carnations into the waves crashing against the sea wall. Their stories provide inspiration for us to continue to fight the good fight.

For more on the Ft. Point Gang see Constance Coiner, Better Red: The Writing and Resistance of Tillie Olsen and Meridel Le Sueur, University Of Illinois Press, Urbana and Chicago, 1998.