You are here: Home / News / “The First Casualty of War is the Truth!” 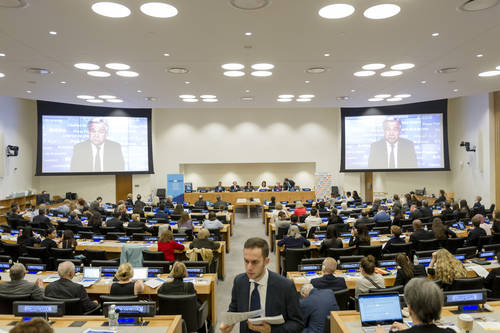 On May 4, UNESCO and the UN Department of Public Information (DPI) commemorated World Press Freedom Day at UN Headquarters in New York. The theme was “Critical Minds for Critical Times: Media’s Role in Advancing Peaceful, Just and Inclusive Societies.” There were two high-level panels and the audience included the diplomatic community, NGOs and journalism students from five major Universities.

NWU President Larry Goldbetter represented the International Federation of Journalists at this event. He reported on the IFJ campaign against Gender Based Violence, spoke about the 175 journalists jailed in Turkey, including Ahmet Sik for an alleged terrorist tweet, and the violence against journalists in the Philippines. He said the main force driving the attacks on a free press around the world is the permanent state of war. His remarks can be seen at the 2:27 mark here.

Professor Jay Rosen of Arthur L. Carter Journalism Institute at New York University offered an overview of today’s challenges and discussed how journalists and media outlets can re-earn the trust from the public.  Bob Garfield, co-host of Public radio’s “On the Media,” described how the press is being discredited and manipulated, threatening First Amendment rights, while Sarah L. Ryley, investigative journalist at The Trace, argued that the loss of local news outlets is directly related with the loss of credibility of major news agencies.