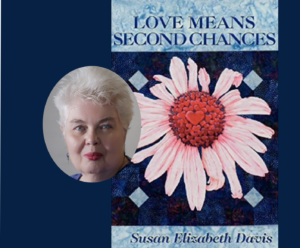 With the Supreme Court’s expected overturn of Roe v, Wade, nuanced perspectives on abortion are rare. So it’s a good time to revisit Susan Elizabeth Davis’s Love Means Second Chances. Her novel empathetically conveys the real-life impacts of reproductive choice on a mother, daughter and grandmother, whose different feelings about abortion threaten to tear them apart.
“Set in the 1990s, this book is timely as a tweet,” wrote reviewer Martha Roth. Other reviewers praised it for its dialogue, for avoiding stereotypes and preachiness, and for characters with rich mental and emotional lives. “Davis becomes every one of these women when they are speaking,” wrote Ken Wachsberger. “She gets insides their hearts and enables them all to be sympathetic, believable characters.” An Amazon reviewer wrote, “I could identify with all three women and as well with the men in their lives. They’re so real that I could alternately love them and want to yell at them.”
Davis was a prolific writer, editor and union organizer, serving as the NWU’s New York Chapter co-chair, Book Division co-chair, External Organizing VP, and National Grievance and Contract Officer. She worked on this novel for 30 years, and self-published it in 2011 (Bread and Roses Collective). She died of a stroke just two years ago. Read more about her remarkable life here.
Sue Davis may no longer be with us but her writing lives on. You can read the novel’s first chapter on amazon.com, then order it from your indie bookstore or read it on Kindle.