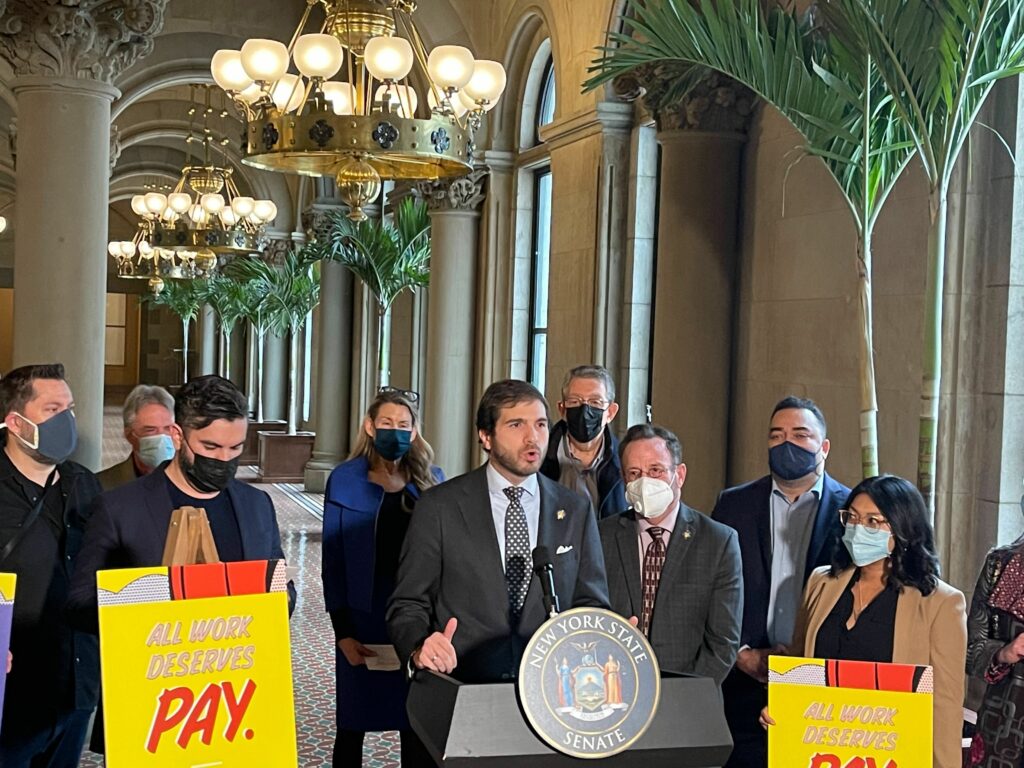 To view the livestream of the press conference, click here

Albany, NY — Today, State Senator Andrew Gounardes and Assemblymember Harry Bronson introduced “Freelance Isn’t Free”, S8359, a new bill that would protect contract and freelance workers from wage theft by ensuring all freelancers receive appropriate contracts for their work, are paid in a timely manner, and have state support to recoup unpaid wages.

Roughly one third, or 59 million Americans, are freelance or contract workers. Together these workers contributed nearly $1 trillion to the national economy in 2020. Freelancers, who are not covered by the National Labor Relations Act, have no clear legal recourse against wage theft, discrimination, harassment, or other forms of exploitation.

The state-wide Freelance Isn’t Free legislation would build on a 2017 New York City bill, introduced by then-Councilmember Brad Lander by requiring written contracts to be given for any worker receiving more than $250 for their work, and providing workers with additional financial remedies if the contractor tries to avoid paying them. The bill would also expand protections state-wide.

The bill would also ensure freelancers all across the state have access to increased enforcement resources. Under the New York City law, the NYC Department of Consumer and Worker Protection oversees the protection of freelancers in NYC, but are not empowered to go after delinquent clients. Should S8369 become law, the New York State Labor Department would be the regulatory agency for freelancers.  This increased capacity will be crucial, as enforcement is a key part of this legislation. For example, if a client refuses to provide a contract to a freelancer within NYS, the client can face a $250 penalty in court. Clients would be legally barred from retaliating against a freelancer for pursuing payment. New York State would be responsible for investigating any claims of non-payment, retaliation, or contract violation, may try to collect on the freelancer’s behalf, providing court navigation services if necessary. Finally, freelancers would be able to collect double damages, and attorney’s fees, in court.

“Freelance and contract workers play an essential role in our economy, and it’s far past time we make sure their rights as workers are fully protected statewide,” said State Senator Andrew Gounardes. “As unionization and workers’ rights efforts are growing throughout the country, it is our responsibility to protect freelancers all throughout New York State.”

In my many years as a labor attorney and now as a member of the New York State Assembly, I know that independent contractors are not protected by the same wage laws as regular employees and generally ineligible for unemployment and workers compensation. They are some of the most exposed workers in our state when it comes to wage theft with little redress under current law,” said Assemblymember Harry Bronson. “Freelance workers are a rapidly growing sector of the economy. Our legislation is a commonsense approach to ending the economic discrimination faced by freelancers. Through this legislation we are recognizing their value and contributions.”

“Let’s be clear: when a freelance worker has to chase and remind a client for payment, that is wage theft. The Excluded Workers Fund, PUA, and the litany of rapid-response solutions we enacted during the pandemic showed us the sheer scale of workers who are not covered by our safety net as it stands. New York City has recovered $2.1 billion in overdue or stolen wages for workers since Freelance Isn’t Free passed on the city level,” said State Senator Jessica Ramos (D, WF – SD13). “I fully support Senator Gounardes and Assembly Member Bronson’s effort to scale this up and view it as my responsibility as Chair of the Senate Labor Committee to help make it happen.”

“Freelancers shape our daily lives with iconic images and unforgettable content and our creative community is at the heart of what makes New York a truly dynamic and exciting place to live,” said Assemblywoman Latoya Joyner (D-Bronx, 77th AD), chair of the Assembly Labor Committee. “Freelance content creators in our state should know that they will be treated fairly and equitably and I look forward to working with my colleagues, Assemblyman Bronson and Senator Gounardes, as we look at legislative action to ensure that freelancers have their talent respected on the job.”

“Quality work deserves quality pay. Freelancers are a vital part of the New York economy, yet far too often they are cheated, scammed, and bamboozled out of the pay they are due,” said Assemblymember Nathalia Fernandez. “Employers of freelancers need to be held accountable — and we must ensure that they pay what is due, when it is due. Freelance isn’t free.”

“Freelancing has become a norm in our economy, with over 59 million freelancers contributing more than $1.2 trillion to the national economy. Yet, these important workers remain unprotected from wage theft, discrimination, harassment, and exploitation,” said Senator Alessandra Biaggi. “Although New York City has taken measures to protect freelance workers by passing the Freelance Isn’t Free Act, New York State must do more by enacting protections statewide and expanding upon the City’s legislation. Freelance workers are just as important as any other workers, and deserve the right to fair pay, equal treatment, and a working environment free from harassment and discrimination.”

“Far too often, we hear from our members across New York that they have experienced client non-payment. Furthermore, they spend even more time and funds fighting to bring these unscrupulous clients accountable. In 2017, we fought to create the Freelance Isn’t Free Act for NewYork City freelancers and since then the city has recovered $2.1 billion in unpaid contracts,” said Rafael Espinal, President of the Freelancers Union. “As more New Yorkers pivot to freelance work, it’s time to make sure that all freelancers have access to these vital protections and it’s why I’m proud to join Senator Gounardes and Assemblymember Bronson in introducing the New York State Freelance Isn’t Free Act.”

“Over the years, NWU has collected millions of dollars for unpaid freelancers, sometimes in expensive court cases and other times by organizing the power of the freelancers to push back against deadbeat publishers,” said Larry Goldbetter, President of the National Writers Union, Local 1981. “What’s even more striking than the millions we have collected is the hundreds of millions that have gone uncollected as nonpayment and late payment has become a business model. Passing the Freelance Isn’t Free law in New York State will be a giant step in making this model illegal and bringing independent contractors the protections of labor law they so deserve.”