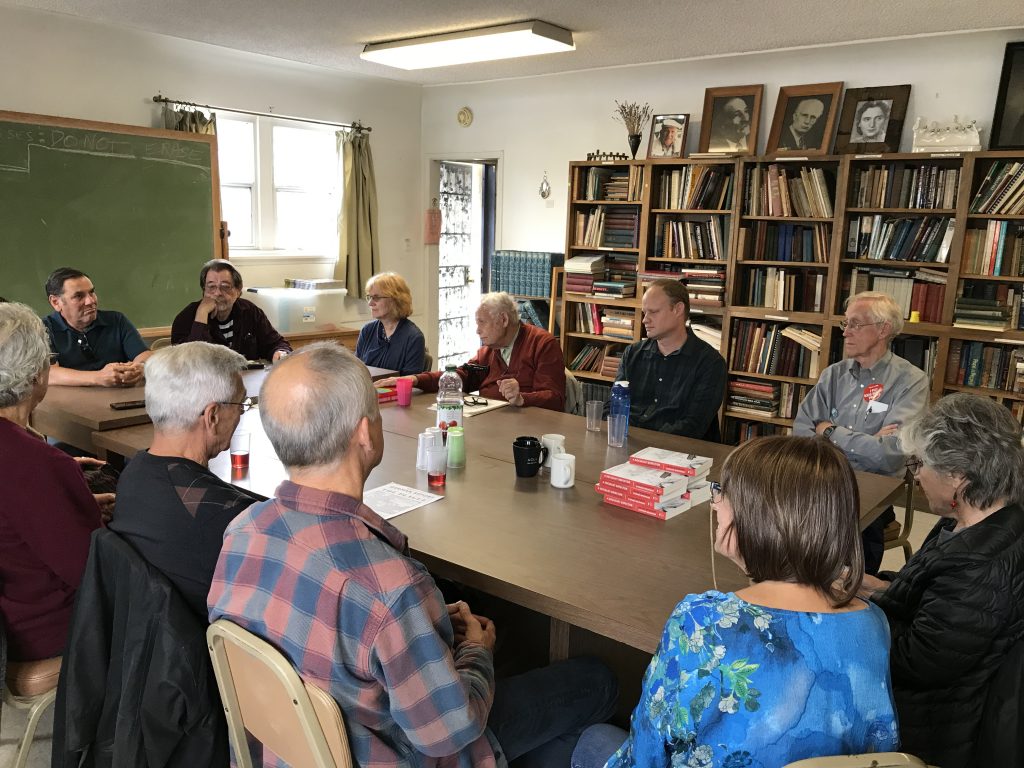 Victor Grossman, a New York “red diaper baby” of the 1930s and resident of East Berlin since the 1950s, recently made a 10-week transcontinental tour with his new memoir and meditation on left politics, A Socialist Defector: From Harvard to Karl-Marx-Allee (Monthly Review Press). It is a richly told story unfolding in rare, personal detail.

On June 2, he spoke before the National Writers Union SoCal chapter at Workmen’s Circle in Los Angeles. About a dozen people attended, including NWU members and the author’s online followers. His appearance was co-sponsored by Arbeter Ring (Workmen’s Circle), a national secular Jewish organization founded in 1900 by Yiddish-speaking immigrants, which also generously hosts NWU meetings.

Grossman is a longstanding member of the Union of German Writers and writes frequently on contemporary German politics for various progressive Internet outlets. He discussed the role of writers and other artists in the socialist German Democratic Republic (East Germany), and the sensitive issues of Holocaust survivors, postwar reparations, and relations with Israel and Palestine.

He was an eyewitness to the evolution of the GDR over nearly 40 years until the 1990 reunification. Grossman, who has maintained his U.S. citizenship, developed a supportive, though not uncritical stance toward veteran Communists who were trying to make at least part of German territory socialist.

One of his early jobs as a journalist in the GDR was as assistant editor of the German Democratic Report, an English-language newspaper. One of its principal campaigns was to expose the deep penetration of former Nazis into the infrastructure of the West German state and economy. Though there were political red lines that could not be crossed in East Germany, writers, actors, film directors and cabaret artists found ways of making productive criticism that eventually translated into more liberal policies.

One of Grossman’s saddest comments on reunification was that overnight entire bookstores and libraries were emptied of GDR publications, including some of his works. Presumably they were destroyed, including nonpolitical works on music and art. What happened in 1990 was not so much reunification, but colonization and appropriation, he said.

Grossman spoke for 40 minutes, then opened the floor and received a flood of questions. His lucid, sober responses held his listeners rapt for two and a half hours. In conclusion, the socialist society he lived and described in several aspects bears up favorably in comparison to the job precariousness, home evictions, homelessness and poverty, imperialism and militarism of the United States, leaving his listeners with much to think over.