You are here: Home / News / SoCal Member Meet Up 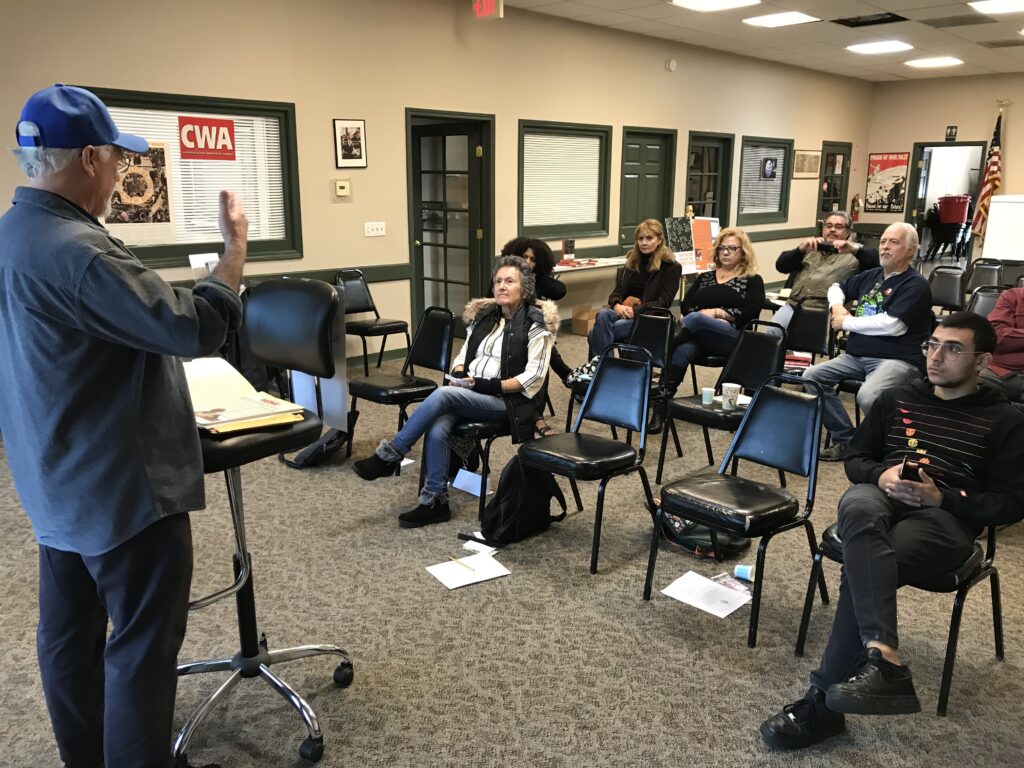 For our last meeting of the decade, Dec. 1, SoCal NWU featured presentations by members James Smith and Dan McCrory, who recently published books.

SoCal chair Ismael Parra welcomed a hardy crowd of a dozen members to the CWA #9003 in Burbank, CA, Dan’s former union hall. Ismael invited everyone to enjoy a scrumptious lunch, introduced new union pamphlets, and sold a fresh supply of NWU “Workers of the Word” t-shirts.

Pamela Johnson and Dan, both national officers, talked about current union issues, such as holding more “virtual” meetings for our far-flung membership, and the effects of Assembly Bill 5. The latter threatens freelance writers’ livelihood in California by classifying them, along with Uber and Lyft drivers, as contract workers entitled to employee benefits. The NWU is concerned that even the carve-out for writers (a maximum of 35 articles a year for any one publication) is already discouraging publishers from employing California writers.

James spoke about his Gentrifying Paradise: Resistance and Removal in 21st Century Venice California, which explores the radical changes in the housing market and land usage at Venice Beach, the losses suffered, the struggles waged, and a small victory or two. He also had for sale volumes of his poetry, including his latest “The Dinner Party Before the Revolution.”

Between authors, Paul Krehbiel made a presentation on behalf of the Labor for Bernie campaign. He asserted that Bernie has the best thought-out position on the role of artists and creative people in the “revolution” of democratic socialism that he aims to launch. Conscious of the shifting sands of politics as the electoral season unfolds, the SoCal membership passed a motion to endorse Bernie Sanders in the California primary next spring.

Brother Dan spoke next about his book Capitalism Killed the Middle Class, a comprehensive but highly readable history of neoliberalism. It posits that this system has so distorted the American economy that it’s virtually impossible for many working people and families to stay afloat, much less get ahead.

Dan reminded listeners of the Lewis Powell Memo, the tract from the Nixon years that laid out a plan of action for the corporate class, much of which has come to pass. As his reward, Nixon appointed Powell to the Supreme Court to help lock in the corporate perspective in the justice system. Dan’s book features charming political cartoons by Gary Huck.

The membership passed an additional motion, asking the national office to resume listing members’ new book and article titles in its periodic roundups of member activity.