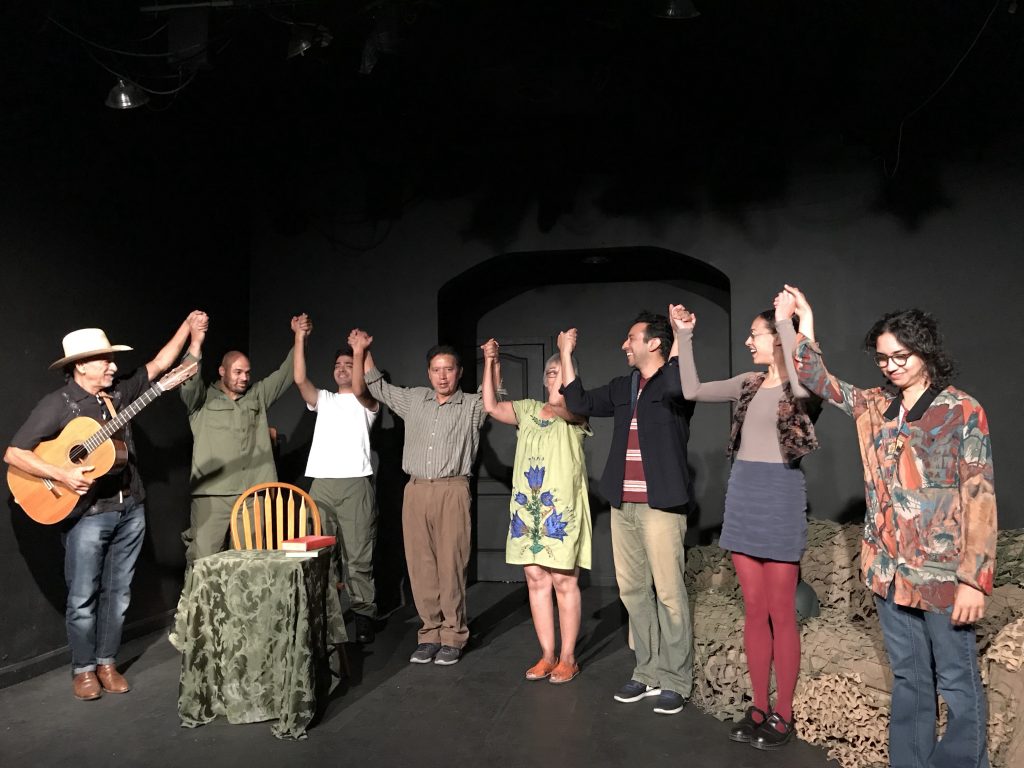 “Many May Not Return,” an anti-war play, will open late June in Chicago at the Prop Theater. Ismael Parra, NWU Southern California chair and music coordinator for the production,  and director David Reyes discussed the fun and challenges of taking your show on the road.
David: How is the play coming along in Chicago?
Ismael: Good, advance sales are moving, the cast is chosen, and we’ve got someone working on publicity.
David: What do you see as some of the challenges taking the show on the road?
Ismael: In LA, we know lots of people and have many union ties. In Chicago, we know very few, which makes promotion more of a challenge. But we depend on those we do know there. At the same time, taking it on the road is exciting, even if it presents much more work, because the message is so very important.
David: Will the Chicago performances include new cast members?
Ismael: All of the cast is new except for the me, the musician. I break the fourth wall by providing a brief relief from some of more serious parts in the play by using music.
David: You also provide emotional subtext in the play on the serious matters of war and death. Your character is a spirit that is allowed to transcend time and space.
Ismael: True.
David: How important is the message of the play?
Ismael: War and the military budget has the American people in poverty because it costs so much and it only serves to bring destruction in far-off lands, where we send our young to kill and be killed. It is against the natural organization of a civilized society.
David: Is this the type of activity you see the NWU participating in and supporting?
Ismael: It is one of many activities our members are involved in. On Saturday, June 2 we’re sponsoring Victor Grossman in Los Angeles at an NWU meeting and book-signing event. He’s visiting from Germany.

David: Finally, what are the show times and how can you get tickets.
Ismael: Performances are at 8 p.m. Friday, June 21 and Saturday, 22, and 2 and 8 p.m. on Sunday, June 23. Tickets can be purchased online here,