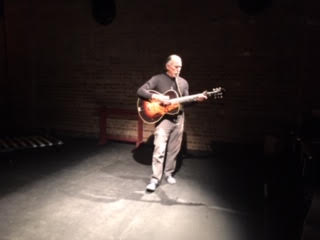 Writer, musician, activist and NWU chapter head, Ismael Parra held a concert fundraiser with the theme “The Struggle for Peace and Planet” on November 23 at an art studio in Los Angeles

The concert was a fundraiser for the play Many May Not Return written by NWU member David Trujillo. The play will run January 24-26 at the Long Beach Playhouse.

The band Premiero de Mayo performed two sets at the sold-out event. The concert highlighted international music from Latin America, as well as music from the United States.

Popular songs by Victor Jara and Sylvia Rodriguez told the story of struggle in Chile and Cuba. “Hasta Siempre, Comandante,” was performed as a slaute to the revolutionary Che Guevara. Premiero de Mayo played a song by the popular Chilian group inti-Illimani and other international songs.  Ismael also directed the crowd in sing alongs to “Guantanamera” and “De Colors,” the latter a song about farmworkers.

The second set featured original music by Ismael focusing on solidarity songs with teachers, workers, and peace. It was an international night of songs and solidarity for a great cause.