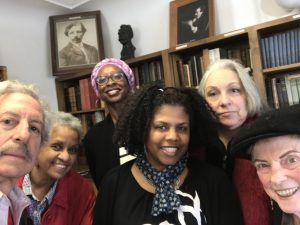 The SoCal Chapter met Sat., Feb. 24 at the Workmen’s Circle in Los Angeles. Five members plus one prospective member attended—five women and one man. We began with a live video interview with NWU President Larry Goldbetter, who spoke about various non-payment grievances (NPGs) in progress. He spoke in particular of a forthcoming agreement with Ebony for $80,000 worth of payments to authors. Other cases involve Nautilus and Uptown. One of our new members, present at the meeting, is one of the Uptown writers. Larry also spoke about freelance contracts at The Nation and In These Times and the attempt to pull in more agreements at left- and union-friendly publications such as The Progressive, American Prospect and Jacobin. The objective is to start establishing a nationwide standard for freelance work, which does not exist at present; in fact it is not necessarily even standard that a writer get paid at all! As the designated representative organization in the United States for the International Federal of Journalists (IFJ), NWU represents IFJ at the United Nations.
Building on the success and popularity of members reading their current writing to the chapter, we took a slightly different approach this time: Writers read, and their fellow writers were invited to offer their comments, criticisms and suggestions. Three writers chose to present their work, and helpful critiques followed. Two writers chose not to present, and the last member instead took the opportunity to solicit advice on matters concerning publication.