You are here: Home / News / Sign the Petition to Save Mumia’s Eyesight 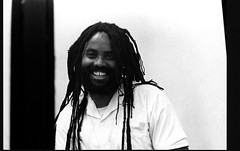 Recently the National Writers Union learned of a petition to save journalist Mumia Abu-Jamal’s vision. In 1982, he was sentenced to death after being convicted of murdering a white policeman in Philadelphia. Circumstances surrounding his trial, however, cast serious doubt on the veracity of the proceedings.

Over his decades in prison, his health has deteriorated. Recently, Abu-Jamal was diagnosed with glaucoma, vitreous detachment, and cataracts in both eyes that could blind him, jeopardizing his journalistic career and his life.

In 2015 the NWU Delegate Assembly passed a resolution to join the campaign to win Abu-Jamal the treatment he needed for hepatitis C after a life-threatening heath scare; he received the treatment in the spring of 2017 after an international outcry.Now he desperately needs eye surgery, but the Pennsylvania Department of Corrections has failed to respond to urgent requests to save his eyesight. Here is a link to a petition demanding it. The NWU is also adopting a resolution to the same effect.

Abu-Jamal became widely known on death row for his writings and commentaries (available at prisonradio.org) about the U.S. criminal justice system. After numerous appeals, his death penalty sentence was commuted to life imprisonment without parole.

After joining the Philly chapter of the Black Panther Party as Minister of Communication at 14, Abu-Jamal later served as president of the Philadelphia Association of Black Journalists. The National Writers Union awarded him honorary membership in 1995 — the same year he published Live from Death Row, the first of nine books.