You are here: Home / News / Schivone on Staying Relevant as a Writer 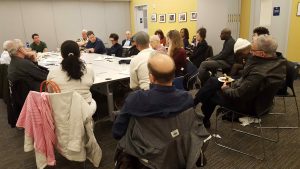 Gabe Schivone spoke on April 11 at the NY UAW conference rooms about his experience writing for a
plethora of genres and platforms, from theatrical scripts to comic books, and nonfiction historical accounts to novels.
His talk was hugely informative and covered his start as a journalist by interviewing Naom Chomsky, pitching articles, and encountering multiple rejections.
One of his more surprising comments was that his income derives from three streams: writing; speaking engagements based on his expertise as a human rights observer (especially for Central and South American immigrant rights); and grants and university artist-in-residence programs.
He has received significant stipends for researching subjects he is interested in, and has been granted paid residences in colleges and universities, where he mentors students.
All in all, it was a powerful program. The NY Chapter hopes to have it available online in the near future.