On November 19, a Wisconsin jury found 18-year-old racist vigilante Kyle Rittenhouse not guilty on all charges involving the murder of two unarmed protesters and the wounding of a third. Rittenhouse illegally crossed state lines with an AR-15 rifle he was too young to possess, to “protect” an empty used car lot that he had no personal connection to. Judge Bruce Schroeder refused to allow the murdered protesters to be referred to as “victims,” and after the not-guilty verdicts declared, he “couldn’t have asked for a better jury.”

The shootings occurred in August 2020, during protests against racist police terror that started in May with the murder of George Floyd and continued in Kenosha after Jacob Blake was shot 7 times in the back and paralyzed by Kenosha cop Rusten Sheskey, as Blake’s children sat in the back seat of the car. Like Rittenhouse, Sheskey walked away.

The Rittenhouse verdict opens the door to racists around the country, who have held armed rallies at state capitals against COVID mask mandates, to not only to carry their weapons but to use them. The spread of racist ideas leads directly to more racist violence. Witness the right-wing campaign against Critical Race Theory and the teaching of systemic racism in public education.

In “A Frenzy of Book Banning” (NY Times, 11/12/21), Michelle Goldberg pointed out that “In Texas and South Carolina, Republican governors have called for action on ‘obscene’ content in school libraries. Public schools in Virginia Beach have pulled books including Toni Morrison’s ‘The Bluest Eye’ out of their libraries pending the results of a challenge by conservative school board members. Schools in North Kansas City, Mo., have done the same with books, including the acclaimed memoir ‘Fun Home’ by Alison Bechdel and ‘All Boys Aren’t Blue,’ a book of essays about growing up gay and Black by George M. Johnson. In Flagler County, Fla., a member of the school board filed a criminal report over the presence of ‘All Boys Aren’t Blue’ in her district’s school libraries, claiming it violated state obscenity laws.” (Editor’s Note: George Johnson joined NWU in 2017 as part of a mass non-payment grievance against Ebony Magazine.)

Former NWU national officer Bruce Hartford noted, “What we face today is fundamentally different than the small, spontaneous, book-banning efforts we’ve seen in the past…It is a new form of McCarthyism……when books and ideas were banned and suppressed, teachers and professors were fired, speakers and films were barred, victims were persecuted and jailed, violent mobs were incited, and organizations were smashed and destroyed…” 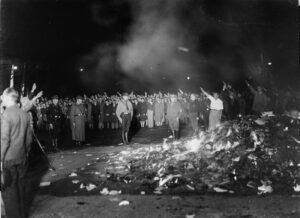 The banning of Toni Morrison, one of the most admired contributors to American  literature, and the freeing of Kyle Rittenhouse, a racist terrorist, are danger signs as to where this society is headed. One can’t help but think of the May 10, 1933, book burnings carried out across Nazi Germany, the largest in Berlin where, as books were destroyed,  40,000 people gathered to listen to Joseph Goebbels, chief propogandist for the Nazi Party. Little more than a decade later, 100 million people had perished in World War II. Among those burned books were the works of Jewish poet Heinrich Heine, who wrote in 1822, “Where they burn books, they will, in the end, burn human beings too.” (US Holocaust Museum)