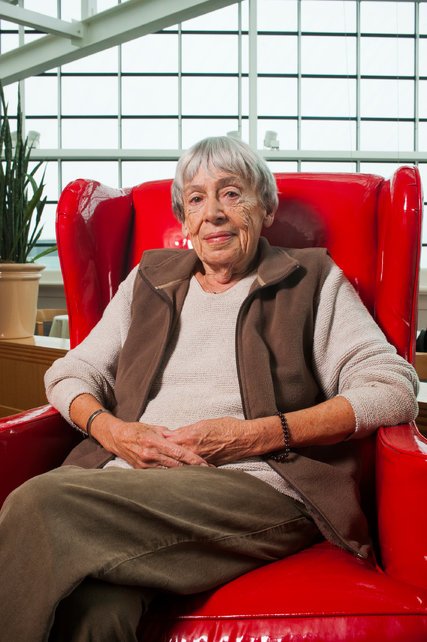 It is with great sorrow and the deepest respect that we bid farewell to Sister Ursula K. Le Guin, a  ground-breaking author, radical, feminist and revolutionary as well as a literary giant. What’s more, she was one of us, a member of NWU.

She was the author of more than 20 novels, a dozen books of poetry, more than 100 short stories, 13 books for children and much more. Her work was translated into more than 40 languages and her books sold millions of copies. She was the winner of the World Fantasy award for lifetime achievement and a “Grand Master” of the Science Fiction Fantasy Writers of America (SFWA). In 2014, she was awarded the National Book Foundation’s Medal for Distinguished Contribution to American Letters. She accepted the award to share with all the other science fiction and fantasy writers “who were excluded from literature for so long…”

She was a feminist and an anti-racist. In 1987 she declined to write a blurb for an all male anthology, and in 2004, she publicly attacked the Sci Fi Channel for ruining her Earthsea books, when they cast Ged as a white man when in the book he has “red-brown” skin.

She was also a strong union member. In 2009, NWU, SFWA and ASJA were three author’s groups opposing the Google Book Settlement between Google and the Authors Guild.  Ursula stood with with those opposing Google and resigned from the Authors Guild for the duration of that battle. In her letter of resignation she wrote, “There are principles involved; above all, the whole concept of copyright; and these you have seen fit to abandon to a corporation, on their terms, without a struggle.  So…I am not renewing my membership.   I am, however, retaining membership in both the National Writers Union and the Science Fiction and Fantasy Writers of America, both of which opted out of the ‘Google settlement.’  They don’t have your clout, but their judgment, I think, is sounder, and their courage greater.”

When asked to write a comment urging writers to join the union, she wrote,  “How can a writer become part of a group actively working for writers’ rights? Is there a support group for us – is there anybody out there who speaks our language? The National Writers Union does. Everybody in it is a writer. Everybody in it has a voice in policy and decision-making.”

The world of literature is greater for having had Ursula K. Le Guin in it. The same can be said of the world of politics and of our union.  We hope that many young writers will help to fill that hole left by her passing, and join Ursula’s union.

You can read more about her life here and here.

See an excerpt from her book The Dispossessed.