You are here: Home / News / Report from the 2022 Congress of the International Federation of Journalists 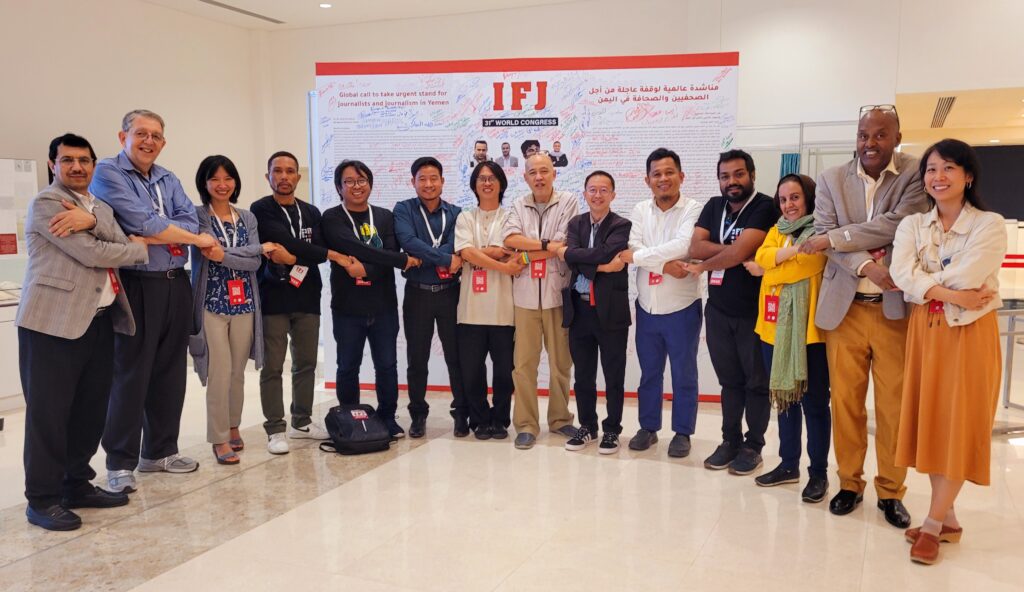 June 6, 2022 – Omanis are known for their easeful hospitality, and so it was that, in late May, a group of us journalists, having arrived via Doha, were received with a platter of tea and dates at the Muscat airport. In a waiting room reserved for delegates of the 31st congress of the International Federation of Journalists—a sort of triennial United Nations for media unions—we made small talk in English. A television producer from Serbia, no easy place to do journalism, asked,“How are things in your countries?” An Indonesian reporter said that things were mercifully stable at the moment. The same for a Cambodian man who regularly assists imprisoned journalists. When I said that I was from the U.S., the Serbian replied with a wry smile, “Oh, you’re American, you’re not part of this conversation.”

However chilling the Trump era was for the US media, we have generally had an easy time. This was a humbling takeaway from the four-day IFJ Congress, which I had the honor of attending with Larry Goldbetter, on behalf of NWU. We heard from journalists in Togo and Afghanistan who face life-threatening violence on the job; a Ukrainian whose home in Lviv is now a crowded way-station for colleagues seeking westerly sanctuary; and a Mexican reporter who has lost many friends to their craft. Brazilian reporters described the dangers of their work under Bolsonaro, and all of us delegates stood for a minute of silence to honor Al Jazeera’s Shireen Abu Akleh, who was killed by Israeli forces in May. (NWU has joined IFJ and the Palestinian Journalists Syndicate to demand war crimes charges against Israel for its targeting of journalists.)

Throughout the Congress, delegates approached Larry and me with small requests for the State Department and Washington-based NGOs. Our privilege, by birthright, was not lost on us; nor was the American legacy of harm in so many regions of the world. But at the same time, we were reminded of the contingency of our freedom: a French delegate made a brief presentation on the forty-year campaign to free the Black radical journalist, Mumia Abu-Jamal. Mumia addressed the Congress through a pre-recorded greeting from his prison cell in Pennsylvania.

The last IFJ Congress was in Tunis, in 2019, before the shattering effects of Covid-19. On a panel titled “Journalism in the time of the pandemic,” a Peruvian delegate explained the disproportionate deaths suffered by journalists in South and Latin America, especially freelancers. The virus had layered one danger over another: the recession of 2020 translated into layoffs and a shift from full-time to contingent work. In other parts of the world, however, Covid was something of an afterthought. “We have bigger problems than the coronavirus,” an Afghan delegate told Larry and me.

The pandemic has not, of course, slowed organizing among journalists in the US. Jon Schleuss, president of NWU’s sister union, the News Guild–CWA, gave a presentation via Zoom on the continued expansion of journalism staff unions across the country. Afterward, a delegate from France told me that she was moved by the ambition and speed of the campaign. (Perhaps the only upside of our sclerotic US labor regime is its occasional provocation of shop-floor radicalism, I thought.) But not all the attendees were labor radicals: some were from groups that operated more as professional associations than trade unions. And, judging from their comments, some of the unions wished only to preserve the status quo of their members. I felt proud of the outward-facing work of NWU and the NewsGuild.

The last morning of the congress, Larry and I received a bit of happy news from home. In Albany, New York, the Freelance Isn’t Free bill had passed both houses and was awaiting the governor’s signature. (A municipal version of this law has been in effect in New York City since 2017.) Delegates from the United Kingdom and Ireland treated Larry to an early-morning whiskey toast, while I made a general announcement about the bill, inviting all those interested in freelance organizing to come chat with us during the break. The response was touching. We had conversations with journalists from Namibia, Rwanda, the United Arab Emirates, India, and Australia. And colleagues from the Netherlands, Germany, and Australia told us about their own recent successes against the abuse of freelancers. Our priorities at NWU seem to be increasingly relevant, as the migration of media online, paired with public disinvestment, makes a global precariat of us all. Larry and I return from Oman emboldened, with more allies in the fight.