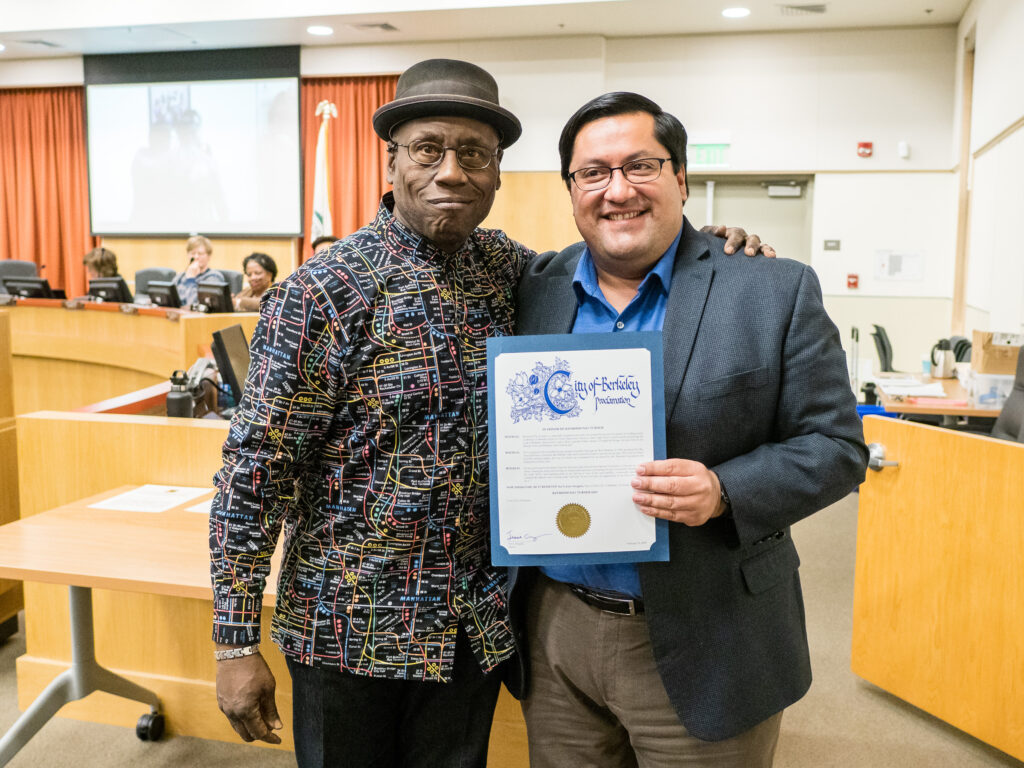 Raymond Turner receives an award from the Berkeley City Council. Raymond, with Zigi Lowenberg, is the core of the spoken word/poetry/jazz ensamble Upsurge. Raymond got the award for performances and teaching youth. Award given by the mayor of Berkelely, Jesse Arreguin.

Tuesday February 25 was proclaimed “Raymond Nat Turner Day” in Berkeley. Never in my wildest imagination had I dreamed of having a day in my honor. Had I bothered dreaming, the Peoples’ Republic of Berkeley—which has  paid holidays commemorating Malcolm X and Indigenous Peoples Day as well as MLK—would certainly have been the setting.

The ceremony began with Berkeley’s Mayor Jesse Arreguin reading,  “Whereas.” He noted that I’ve “performed everywhere from the Monterey Jazz Festival and Harvard University to Panafest in Ghana always sharing his truth and insisting on being heard and seen, prompting the poet Gwendolyn Brooks to call his work ‘lively,’ and inspiring peers that he is ‘one of the most prolific, consistently beautiful and unabashedly radical voices writing today.'” He said, ‘if you ever have an opportunity to see him perform, just do it’

It was all so surreal! Even so, Mom’s training took charge: I thanked the Mayor and City Council. I acknowledged my teachers, labor leaders, activists, the Berkeley Poet Laureate, peers from the California Arts Council, as well as friends and family.

Recognizing I was up against the clock—and “thank you” could quickly consume my 3 minutes—I launched into my piece, “Whoppers of Boss Tweet” based on the great Antonio Carlos Jobim’s “Waters of March.”