You are here: Home / News / Poetry for All and All for Poetry 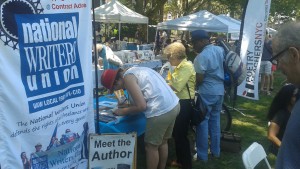 Now celebrating its fifth birthday, the New York City Poetry Festival continues to flourish. Thousands of people turned out for this year’s event, which was hosted by the National Writers Union, on Governor’s Island, where Guggenheim Fellow Nick Flynn and esteemed Poet and Educator Patricia Spears Jones served as headliners.

It is hard to believe that a little less than five years ago, New York City didn’t have it’s own poetry festival. The Big Apple. Publishing capital of the world. Where some of the greatest poets ever first found their voice.

Living in a megalopolis such as this one, a person can easily be overwhelmed by what’s already been accomplished, and wonder what more could possibly be done. Then someone devises an idea like the fest, which leaves everyone astonished at how it ever could have been overlooked.

Business partners Stephanie Berger and Nicholas Adamski initially teamed up at The New School’s Poetry MFA program when they were both students, and discovered NYC’s grave oversight.

Perhaps the idea for the poetry festival was gestating, waiting for these two souls to come along, because no two better people could have established the event. Not only are they devoted to poetry, but they’re also committed to nurturing and promoting the arts for everyone.

Beyond lacking a poetry festival, New York City can be a difficult place to access the communities of poets.  Stephanie and Nicholas wanted to establish a folksy, grassroots festival that operated on egalitarian principles for the sole purpose of promoting beauty.

In addition to the festival, Stephanie and Nicholas established the Poetry Brothel, which goes beyond the salon to provide a unique poetry experience, allowing members of the audience to go tête-á-tête with poets.  A sensational success, the Poetry Brothel has sprung up eight international cities, from Paris to Bogota.

Garrett Buhl Robinson is a member of the National Writers Union and is making his stage debut in October performing his musical, Letters to Zoey, at the United Solo Theatre Festival at Theatre Row in midtown Manhattan.  www.garrettrobinson.us

Whispering, breathing out, deep
blue notes chasing the A Train
Timing is everything getting from
Sugar Hill in a hurry— in a hurry
getting from Sugar Hill to the 10 O’
clock ferry for Governors Island, 5th
Annual NYC Poetry Festival, my 1st!

Tossing my tattered Bay Area Jazz
Poetry Festival producer’s hat over-
board into unfamiliar waters of the
East River as the ferry glides effort-
lessly past Bay Area gatekeepers, I
recall never really wanting to be a
producer, I just wanted to gig, ever
once in awhile, 3 yrs enough already…

Ah, just showing up relaxed no food
to set out, no schlepping, no questions
to answer, no introductions to peruse
again for perfection, no straining for
witty remarks, no charts to go over again
before handing them out, no personality
puzzles to put together, or pull apart, no
psychotherapy on the fly, no money to
count, sweat, fret and pray over! Relieved
of my duties, life’s radically simplified to
measured schmoozing, two hours tabling for
My 5 min. of fame…