You are here: Home / News / ‘ONE DAY LONGER, ONE DAY STRONGER’ 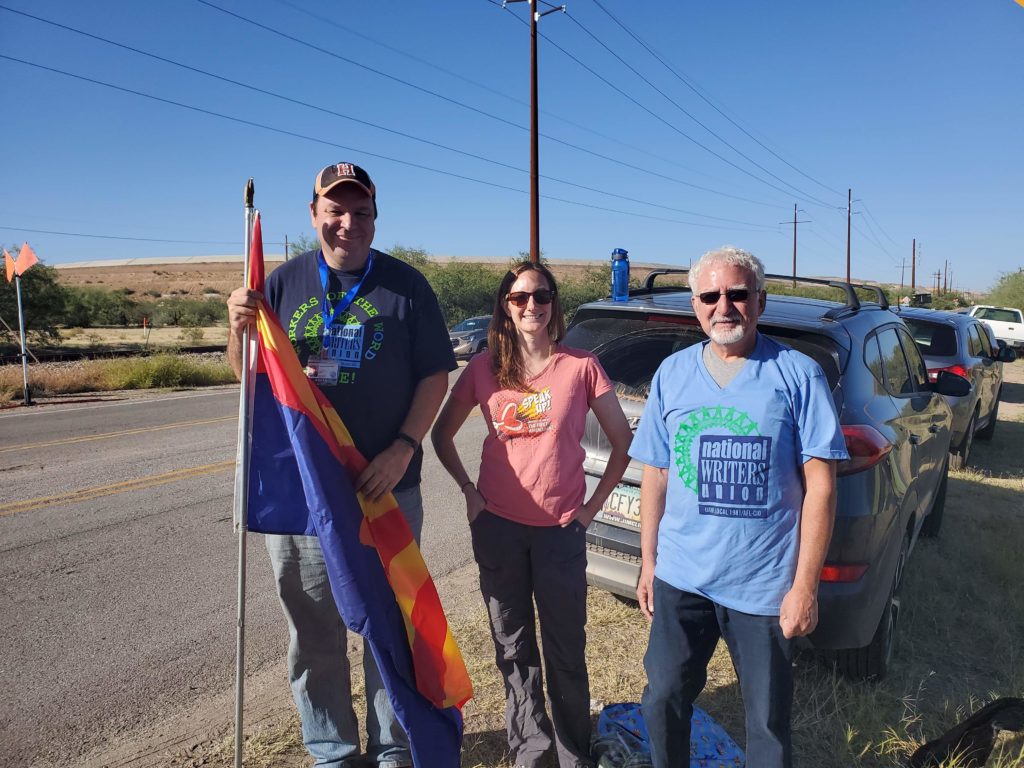 As their strike at several Arizona and Texas copper mining company’s sites drags on, 1,800 workers at ASARCO have adopted the slogan “One day longer, one day stronger,” and waking the picket line since October 13, they’ve had plenty of time to become fortified.

They held a rally and press conference on October 19 at the entrance to ASARCO’s Mission Mine, located on a piece of land leased from the Tohono O’Odham nation near Sahuarita, AZ. Manuel Armenta of the United Steel Workers announced that ASARCO had idled smelters in Kearney, AZ and Amarillo, TX.

“Our solidarity and unity is unbreakable,” said Dawn Schumann, political director for Teamsters Local 104, in remarks before assembled strikers.

Workers at ASARCO mines have been working without a contract and without a raise for a decade. They achieved a victory on one issue last month when the United States Supreme Court refused to hear an appeal of a decision that ASARCO owed employees $10 million dollars in bonuses based on the price of copper.

“The company has a proposal on the table for 62 percent of the workforce not to get a pay increase for another four years,” explained Armenta, who is lead negotiator for the striking unions. “They want to do a hard freeze on the pension plan. They don’t want to give any more money to your 401k. They want to double your premiums and your deductibles.”

Workers balked at the sacrifices being demanded of them.

“What they are offering us is taking away from my family and my brothers and sisters,” said Alex Terrazas of the United Steel Workers, who has been employed at the Mission Mine for 13 years. “It’s ridiculous… It feels like we are being punished for having families.”

Tony Jose, a member of the International Union of Operating Engineers, summed up the workers’ mood:

“Mostly what we are frustrated with is we are being treated like we don’t matter,” Jose said. “We are making them a profit, and we want a share of that profit.”

The strikers enjoy community support. Pima County’s One Stop program has been helping with temporary work for strikers, and Tucson City Council offices are open for food drop offs. In addition, several elected officials joined the picket lines as have members of other unions, including National Writers Union, International Association of Machinists, IATSE, Communications Workers of America, International Brotherhood of Electrical Workers, Mexican union Sindicato Minero, and the labor-affiliated Red for Ed Movement.

On October 30, the company announced they would resume negotiations on November 14.