You are here: Home / News / As Constables, NWU Members Try to Keep People in their AZ Homes 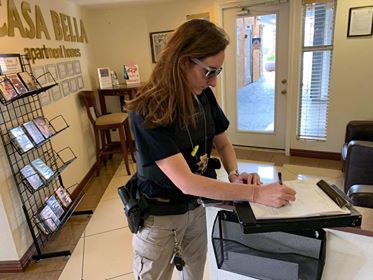 Even before the COVID-19 pandemic, Arizona had issues with evictions. In Pima County, where Tucson is located, 15,000 families were threatened with eviction between 2015 and 2018, according to the Arizona Daily Star.

That per capita rate for eviction puts Pima in the top 25 counties in the nation for displacing people from their homes, according to Princeton University’s Eviction Lab. The shortage of affordable housing in the region means families who lose their place to live—often owing to fall behind in their payments—have few options.

The task of serving evictions in Arizona falls to elected constables. Two of them, Kristin Randall and Joe Ferguson, are members of the National Writers Union, Tucson Chapter. They’ve been using their positions to try to keep people in their homes.

“Constables are allowed under Arizona law to make determinations about evictions for health and safety,” said Ferguson, a former reporter who was appointed to his position after a vacancy earlier this year. “In practical terms, we can delay an eviction for a few days.”

While that’s not a permanent solution, it can gives a constable enough time to help a tenant connect with other community services so they don’t end up on the street.

“We are allowed to delay evictions if people are suspected of having COVID or another serious medical condition or have been financially impacted by the crisis,” says Ferguson. “I have personally halted five evictions in the past month, but there are many more coming down the pipeline.”

COVID-19 has exacerbated a problem that already existed. Tucson has a low-wage service based economy. Even before the closures were ordered by the local government, there were signs that the impact of the pandemic could lead to a regional housing crisis.

“In the early days of the Coronavirus, I was keeping an eye on the numbers…and noticing the growth in cases,” said Randall, publisher of a newspaper in Arivaca, AZ, who has served as a counstable over the last year. “Constable Ferguson and I started to push on social media making phone calls to key representatives [to say], ‘Hey, if this becomes a problem, we need to make sure that evictions are part of the conversation.’ ”

Those conversations put pressure being put on the governor that eventually led to the temporary suspension of evictions. Randall, Ferguson, and other constables are now tracking down things like letters from doctors and other documentation to help delay an eviction.

“We’ve noticed that some property managers and some lawyers are still trying to punch holes in the executive order to try to speed these evictions through,” said Randall. “But we’ve been able to work with our Justice Court to pull most evictions from the calendar. That means that the enforcement is not happening, but that these cases are not being heard. That’s a big deal. That’s not the case in every county.”

There are still evictions, and they are the most difficult cases. Recently, Randall dealt with a mentally ill man who was causing problems for both his landlord and neighbors. Randall delayed the eviction long enough to find services for the man.

“Putting him on the street isn’t helping anyone,” she said. “If there is an eviction, we are delaying it. We are making sure everyone has a place to go before they get evicted.”

But the constables, even with the powers they have, have been getting pushback.

“I have been threatened with a lawsuit more times than I can count,” said Ferguson. “Lawyers have been very interested in taking me to court to override the governor’s executive order.”

Ferguson has had three cases where a landlord brought his decision before a judge. On two occasions, the decision went the landlord’s way.

“[She] went to court five times trying to evict one family,” he said of the third case, adding: “They are still in their home.”

Ferguson and Randall have been working on booklets and videos to help tenants negotiate the eviction process, and have been educating landlords too. Still, they are worried about what will happen over the summer when possibly thousands of families face eviction when the governor’s order expires. Randall calls it the “July 22nd problem.”

Randall is worried about people, mostly service workers with reduced incomes, being able to pay back rent when the moratorium is lifted.

“They will still owe April 1st, May 1st, June 1st, July 1st and August 1st will be coming right up. They are not going to be able to pay that. For people who live paycheck to paycheck, that’s an insurmountable mountain of debt,” she said.

Randall was recently chosen by her colleagues as “Presiding Constable,” which gives her administrative responsibilities over the staff of the 10 Pima County constables share. She has been using that position to keep up the lobbying that she and Ferguson have been doing with the state legislature and local governments to address housing issues in Tucson. They both made a choice to see their responsibilities beyond just the bureaucratic roles that often define their down-ballot elected offices.

“There’s a different way you can do it,” said Randall. “There’s a way to do it where you can bring your values to the workplace.”