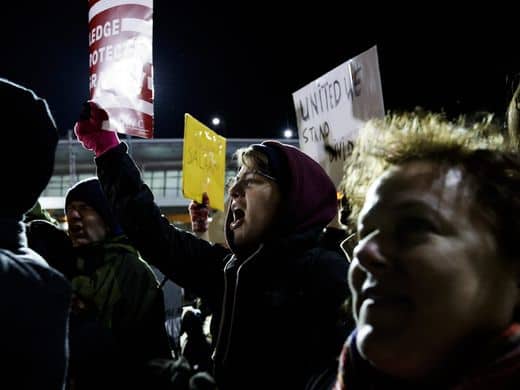 On February 2, NWU joined the NY Taxi Workers Alliance (NYTWA) protest in front of Uber headquarters in Long Island City. The rally was to protest Uber’s attempt to break the one-hour strike against Trump’s Muslim ban at JFK, and Uber CEO Travis Kalanick’s plans to join Trump’s Business Advisory Group. Just before the rally began, Kalanick withdrew from the Council, in an effort to curb the “Delete Uber” campaign that erupted in response to their strike-breaking actions.

On January 28, tens of thousands of people protested at JFK and other airports against the racist travel ban on Muslims from seven countries. In a bold act of international, anti-racist solidarity, the immigrant, and mostly Muslim NYTWA called a one-hour strike against the ban at JFK.

Uber tried to cash in on the international refugee and immigration crisis by cancelling their surge pricing during the strike, exposing them as strike breakers and union busters. The “Delete Uber” campaign struck back as thousands deleted Uber apps from their smart phones. Uber CEO Kalanick and Trump both attack immigrant and Muslim families, making big profits by forcing workers to work for less than the minimum wage and destroying other basic worker protections. The mass actions against the ban and the support for the strike showed Uber that drivers have mass support.

Some of that support came from other unions and community and immigrant rights groups, including NWU. President Larry Goldbetter spoke at the rally and said, “The answer to fascism is not to go back to the way things were before Election Day, but to move forward to a world with no bans and no walls.” We will stand shoulder to shoulder with NYTWA and others who are fighting back.